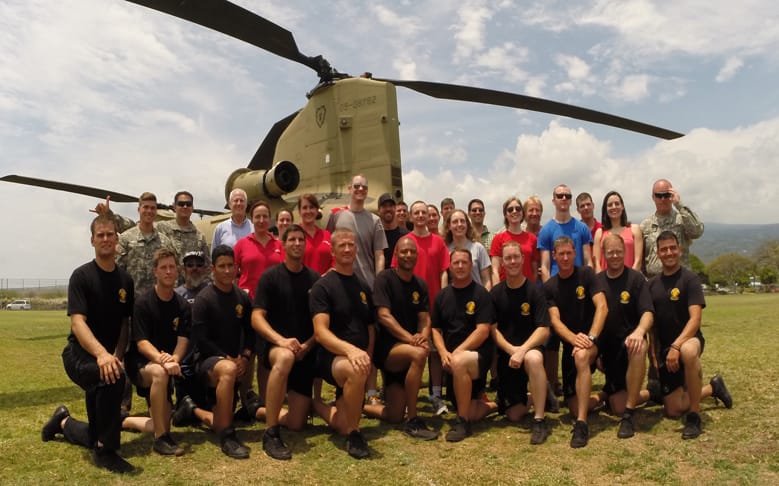 HI-SEAS crewmembers and researchers pose with the U.S. Army’s Golden Knights parachute team in front of a Chinook helicopter that brought the crew ‘back to Earth.’ PISCES photo.

Reentering Earth’s atmosphere from space can take around 60 minutes in a spacecraft plunging at supersonic speed.  For a crew of simulated Mars explorers who just completed an eight-month mission in isolation, reentry to the planet took about 60 seconds at 100 mph.

After the longest Mars-mission simulation ever conducted in the U.S. on the slopes of Hawai‘i’s Mauna Loa volcano, six crewmembers participating in a NASA-funded study called HI-SEAS (Hawai‘i Space Exploration and Analog Simulation) returned to everyday life on June 13 with a free fall from 12,000 feet.  Their dive was facilitated by the U.S. Army’s Golden Knights parachute team over the Kona side of Hawai‘i Island.

Though it wasn’t an identical recreation of a real Earth reentry in a spacecraft, eight months of sensory deprivation from the sounds, sights, and smells of the outside world made the experience one for the books.

“I couldn’t think of a better way to come out of a dome than like this,” said Allen Mirkadyrov, a HI-SEAS crewmember and aspiring astronaut.  “It was pure joy.”

Sophie Milam, a former PISCES worker and robotics researcher on the HI-SEAS mission, has skydived twice but said this plunge was “by far the best.”

The HI-SEAS crew endured living in a 36-foot diameter, dome-shaped habitat for eight months to assess the long-term psychological and physiological effects of isolation on a group of people.  Throughout the mission, crewmembers worked on individual research projects, teamed up for a daily dose of P90X (a trademark, vigorous exercise routine), and explored the creative possibilities of cooking with freeze-dried, shelf-stable foods.  Occasionally, they exited the dome to the otherworldly terrain of Mauna Loa’s rugged lava, but within the cloak of a modified hazmat suit to simulate being on Mars.  Allen says the crew also had access to media uploaded to a local server, enabling the group to watch the full season of “Game of Thrones.” Despite being cut-off from the outside world, there was plenty to do beyond workouts, meal preparation, and entertainment.

Allen, an aerospace engineer who originally hails from Russia, spent his time finding the most energy and time efficient roundtrip route to Mars.  He also studied an Earth-transit occurring from Mars in 2084, when the Earth will pass directly through the sun from the perspective of the Red Planet.

Sophie completed her Master’s degree in Mechanical Engineering during the mission, becoming the first “Martian graduate.”  Her research involved tensegrity robots, which are exceptionally robust and versatile bots that could pave the way for future mechanics.

The crew also consisted of Commander Martha Lenio, Neil Scheibelhut (also a former PISCES worker), Jocelyn Dunn, and Zak Wilson.  They were supported by an experienced team of researchers at the University of Hawai`i at Manoa.  However, the simulated astronauts had no contact with the outside world during their mission except for e-mail.

In spite of the confinement and isolation, the crew agreed that everything worked out well.  No signs of third-quarter syndrome appeared – the anticipated period of isolation when people can start losing their mental and emotional stability.

“It’s unusual to live in these circumstances, but everyone found a way to cope with it,” said Allen. “At the end of the day, we completed the mission.”

The research at HI-SEAS is paving the way for a potential manned colony on the Red Planet within the coming decades.  In August, the study will continue with a 12-month mission.  The recent study was the third and longest yet conducted at the HI-SEAS habitat nestled at over 9000 feet on the slopes of Mauna Loa.

Welcome back to Earth HI-SEAS crew!!  Congratulations on completing your mission!!