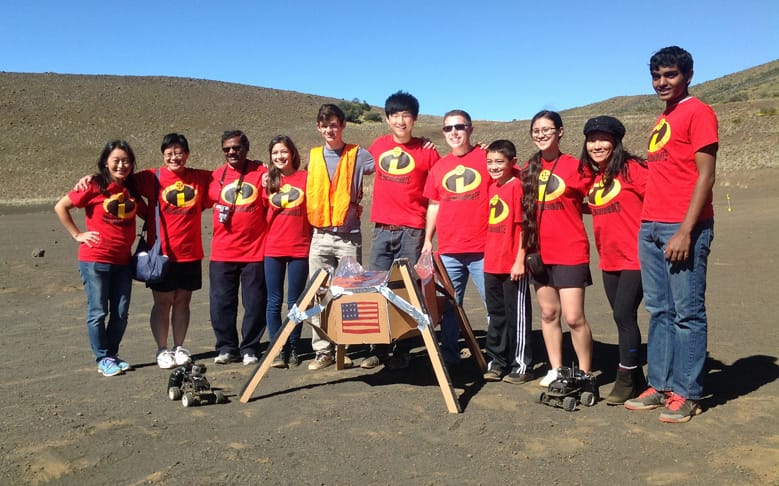 The Incredibots, a team of Ohio youngsters who won the 2014 GLXP (Google Lunar X PRIZE) MoonBots Lego Challenge, embarked on an adventure through Hawaii Island’s astronomy and aerospace hot spots with PISCES this week as part of their grand prize.

Over the weekend, the team got an inside look at the Mauna Loa solar observatory atop the world’s largest shield volcano, sharing their first taste of an appropriate snack for the occasion – star fruit.  They also received a VIP tour of the James Clerk Maxwell telescope on Mauna Kea – the largest submillimeter wavelength telescope on the planet – where they got a peak at planet Uranus with the help of former PISCES student workers.  They continued to look skyward Sunday night during an evening of stargazing at the Ellison S. Onizuka Center for International Astronomy.

Monday morning (Nov. 24), the Incredibots ventured ‘off-planet’ to the PISCES planetary analogue test site, a lunar-like environment that simulates conditions on the surface of the Moon.  They reenacted some key milestones in the real-life GLXP Competition (on which the MoonBots Competition is modeled) including a 500 meter drive using mini planetary rovers provided by 3D Robotics.  Another milestone charged the team with building a mock landing pad and Apollo lander, recreating the historic Apollo landing site to visit with their mini rovers.

PISCES cultural advisory committee member, Koa Rice, welcomed the team Monday afternoon with a Hawaiian ‘pule’ (chant) at the `Imiloa Astronomy Center in Hilo.  The youngsters were then invited inside for a VIP tour of the astronomy exhibit that bridges modern science with traditional Hawaiian culture.

Team Incredibots, a group of friends age 12 to 17, will be headed home later in the week following some extra R&R!  The group beat out over 300 other competitors worldwide to claim their grand prize adventure with PISCES.

A hui hou Team Incredibots!!  It was a pleasure to have you here at PISCES!!