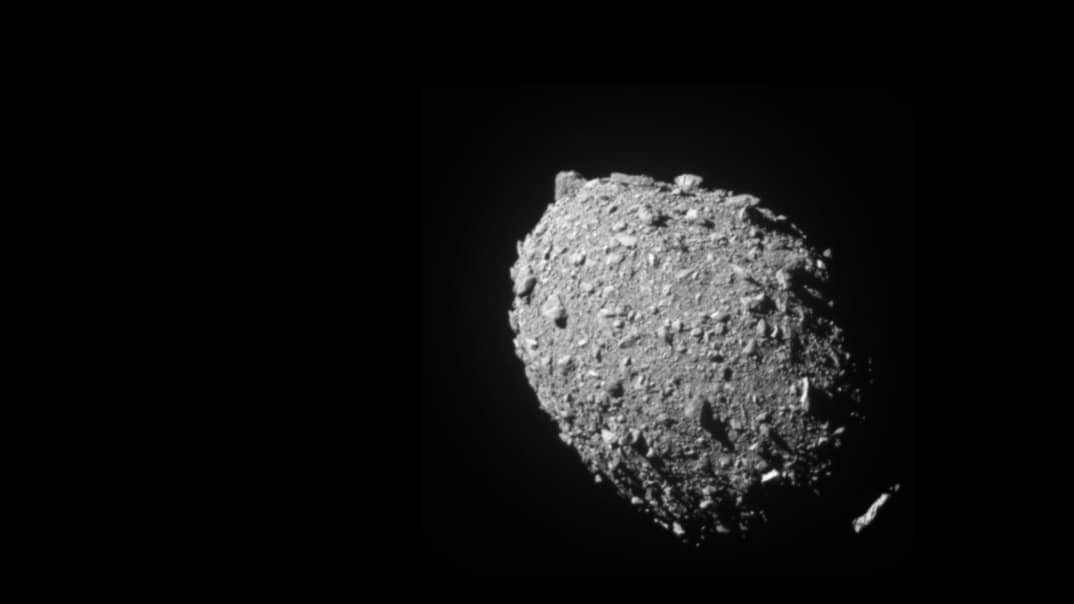 Above: The DART spacecraft captured this image of the asteroid moonlet Dimorphos on Sept. 26 just 11 seconds before impact. Credits: NASA/Johns Hopkins APL

After orbiting the Sun for 10 months in pursuit of an asteroid, NASA’s Double Asteroid Redirection Test (DART) spacecraft met its fate on Sept. 26, plunging into the surface of an asteroid moonlet called Dimorphos. While it’s unusual for NASA to declare mission success after crashing a spacecraft, the DART mission had an unusual objective: alter the course of an asteroid in the first-ever demonstration of a planetary defense technology. “At its core, DART represents an unprecedented success for planetary defense, but it is also a mission of unity with a real benefit for all humanity,” said NASA Administrator Bill Nelson. “As NASA studies the cosmos and our home planet, we’re also working to protect that home, and this international collaboration turned science fiction into science fact, demonstrating one way to protect Earth.”

Dimorphos, a 530-foot-wide asteroid about 7 million miles away that orbits a much larger asteroid called Didymos, poses no threat to Earth and NASA confirms that no known asteroids threats exist within the next century. Even so, NASA is tracking more than 27,000 near-Earth asteroids and an estimated one to two million are hurtling throughout the solar system. 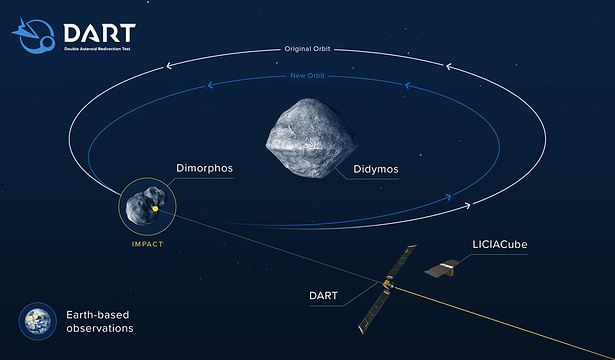 The DART mission was designed to prove this kind of threat could be mitigated. Using a sophisticated guidance and navigation systems, DART flew itself during the final 50,000 miles of its approach to Dimorphos and crashed at roughly 14,000 miles per hour to alter the asteroid’s speed. A companion satellite provided by the Italian Space Agency that deployed from DART two weeks prior captured images of the impact and resulting cloud of ejected matter.

“This demonstrates we are no longer powerless to prevent this type of natural disaster,” said Lindley Johnson, NASA’s planetary defense officer. “Coupled with enhanced capabilities to accelerate finding the remaining hazardous asteroid population by our next Planetary Defense mission, the Near-Earth Object (NEO) Surveyor, a DART successor could provide what we need to save the day.”

Astronomers at UH’s Institute for Astronomy captured the moment of impact and aftermath using the Asteroid Terrestrial-impact Last Alert System (ALTAS) system. The DART research team—led by Johns Hopkins Applied Physics Laboratory (APL) for NASA’s Planetary Defense Coordination Office—is now observing the asteroid system using ground-based telescopes to measure how much the asteroid’s orbit has been affected. Just a minor change in a celestial object’s speed can make a significant difference in its overall trajectory. The data gathered from the impact’s effects will inform computer models and help improve the defense system and create a (hopefully) reliable method for deflecting asteroids.

“This first-of-its-kind mission required incredible preparation and precision, and the team exceeded expectations on all counts,” said APL Director Ralph Semmel. “Beyond the truly exciting success of the technology demonstration, capabilities based on DART could one day be used to change the course of an asteroid to protect our planet and preserve life on Earth as we know it.”