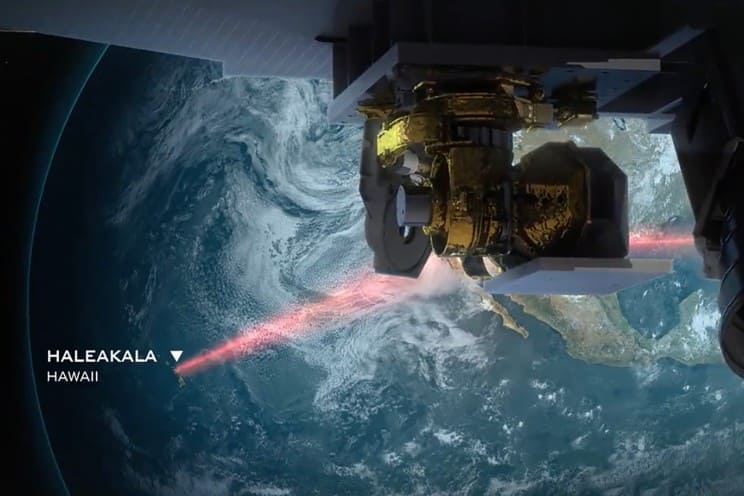 Since the dawn of space exploration, spacecraft and astronauts have communicated using radio frequency (RF) systems. As technology progressed and the data-gathering ability of rovers, probes, and satellites grew exponentially, RF has become increasingly limited. Now, NASA is testing a new laser-based, optical communications system that could replace RF entirely—a technological leap comparable to the evolution from dial-up to broadband—and Hawaiʻi is playing a key role.

On Dec. 7, 2021, the Laser Communication Relay Demonstration (LCRD) launched to test NASA’s first two-way laser system from space about 22,000 feet above Earth. Led by NASA’s Goddard Space Flight Center in partnership with NASA’s Jet Propulsion Laboratory and the MIT Lincoln Laboratory, the LCRD is designed to send and receive data 10 to 100 times faster than RF systems—all within a smaller, lighter, and more energy-efficient package. It functions like an invisible fiber optic cable, firing rapid bursts of infrared light to transmit data between relay points.

Ground relay stations—or Optical Ground Stations (OGS)—are an essential component in this system. Laser communications work by encoding light signals with digital data and beaming them through space. OGS serve as the connection points on Earth that decode the signals. NASA is operating two ground stations for the LCRD mission—one of them, OGS-2, is located at Haleakalā on Maui. Because cloud cover and atmospheric turbulence can disrupt laser signals, this remote, high-altitude site presents an ideal weather situation.

“The way the local meteorology works, there is minimal dust and less atmospheric turbulence at the top of the mountain, which is great for laser communications,” said Ron Miller of NASA’s Goddard Space Flight Center, and former development lead for OGS-2 in Hawaiʻi. “It’s about 10,000 feet up, so you’re above a lot of the atmosphere and weather that occurs below the summit. It’s very common to have a nice sunny day at the top and be cloudy around the midpoint of the mountain.”

The other station, OGS-1, operates at Table Mountain, California, and complements the weather patterns found at Haleakalā. When one is cloudy, the other tends to be clear—and vice versa. To determine which station needs to be used, autonomous monitoring stations continuously observe weather conditions at both sites. Even with clear conditions, the signals can still get muddled by distortions in the atmosphere. Fortunately, engineers are relying on adaptive optics technology to make any needed corrections and maintain a clear signal.

During the next two years, the LCRD mission will measure the impacts of Earth’s atmospheric and weather changes on laser communications. Then the system will go fully operational and serve as a digital freeway between Earth and the International Space Station. If all goes well, optical technology will likely become the backbone infrastructure for space communications, supporting future missions to the Moon, Mars, and beyond. In a fraction of the time it takes traditional RF systems, lasers will relay images, videos, and valuable data about our solar system, aiding our quest to understand the great mysteries of the cosmos.