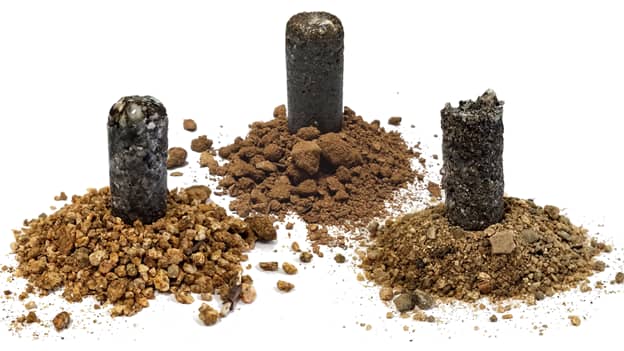 RedWorks is testing various types of dirt and sand to create feedstock for 3D printing systems that can build habitats on Earth and in space. Credit: RedWorks

RedWorks Construction Technologies Inc. is proud to be partnered with PISCES and our continued collaboration in ISRU development has been a testament to how space-based research can benefit and disrupt industries on Earth. Over the last few years, RedWorks has been carrying out a battery of tests for regolith 3D printing systems we developed from technology that was originally intended to print the first habitats on the Moon and Mars. We’ve been testing literally anything we can get our hands on: pre-sifted, fine grain riverbed sand, simulated Martian regolith, even dirt pulled from our own backyards. Regardless of the origin, we’re almost always able to turn dirt into rock that will one day help build homes on Earth and habitats in space. Thanks to the research and advice from our friends at PISCES, we know this material can withstand the same rigors as traditional building materials.

Like PISCES, RedWorks’ goal is to radically disrupt the construction industry’s byzantine supply chain. Instead of shipping concrete or bricks to a site on diesel-burning ships, trains and trucks, or building an expensive concrete plant near-site, a builder can make all the masonry needed completely on-site. This means greener, cheaper building materials, with no delays due to shipping or waste.

We are working tirelessly to bring this technology to builders as soon as possible to begin building homes where no one thought possible—all while making it cheaper to source materials and gather them more locally. We want to make it possible for Hawaii’s builders to never be dependent on mainland or foreign suppliers, but also for those in less-developed places to build regardless of the presence of infrastructure that many markets take for granted. Imagine seeing cities rise out of barren deserts, or ports emerge from the ocean floor itself—all from ordinary dirt and sand that would normally be thrown away. That is the power of this technology. It grants anyone the ability to build anywhere, limited only by their imagination.