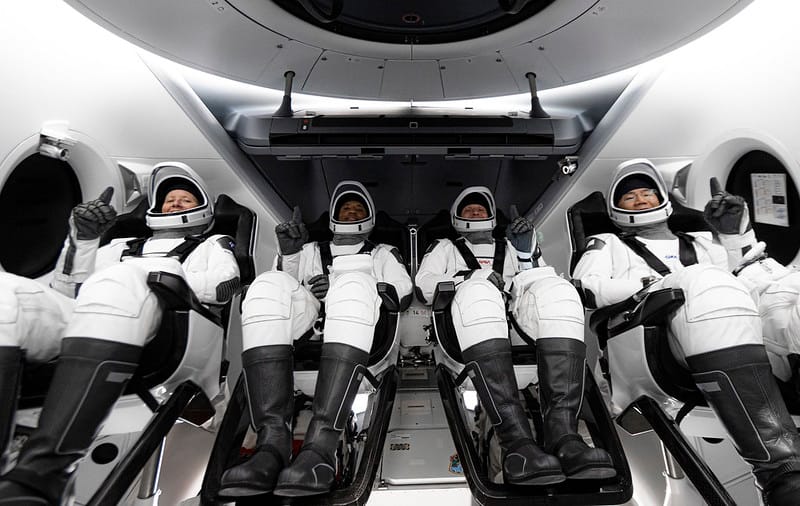 Above: The crew of Resilience inside the Crew Dragon cockpit. Credit: SpaceX

SpaceX broke new ground in space flight again on Nov. 15, 2020, after successfully launching a crew of four astronauts to the International Space Station aboard a Crew Dragon spacecraft. Lofted via a Falcon 9 booster rocket from NASA’s Kennedy Space Center, the mission marks the first operational flight for Crew Dragon since a test flight carried two astronauts to the ISS in May.

“NASA is delivering on its commitment to the American people and our international partners to provide safe, reliable and cost-effective missions to the International Space Station using American private industry,” NASA Administrator Jim Bridenstine said in a press release following the launch.

The crew, who named their spacecraft “Resilience”, included NASA astronauts Michael Hopkins, Victor Glover and JAXA astronaut Soichi Noguchi. Twenty-seven hours after leaving Earth, the quartet arrived at their destination with 500 lbs. of scientific hardware and experiments that will keep them busy for the next six months. Instead of the usual docking maneuvers requiring a pilot at the helm, Dragon parked at the ISS autonomously—a feat reminiscent of Tesla’s autopilot feature in a trickier parking space.

Resilience crew members have now joined the current inhabitants of the ISS, Expedition 64, who are Roscosmos cosmonauts Sergey Ryzhikov and Sergey Kud-Sverchkov, and NASA astronaut Kate Rubins. Combined, the two crews make up the largest to live on the ISS at the same time. The three-seat capacity of Russia’s Soyuz capsule previously limited crew sizes aboard the ISS to six. Dragon can accommodate four astronauts bound for the orbiting laboratory.

Though quarters will be tight, a larger crew means more research and experiments can be accomplished—many of which will examine the effects of space on humans. One study will examine how spaceflight affects the human brain; another will seek to better understand the impacts of microgravity and diet on crew health. In a continuing effort to grow food in low gravity, crew members will also experiment with growing radishes in varying soil and light conditions. A cooling system for NASA’s next generation spacesuits will also be tested for the first time. These experiments and others will better equip humans for long-duration missions to destinations like Mars.

With NASA’s certification of Dragon for human spaceflights, SpaceX will be ferrying crews of international astronauts to and from the ISS a few times a year at a significant cost savings to NASA. The latest flight is the first of six planned for NASA’s Commercial Crew Program. Crew Dragon is the only space vehicle to receive NASA certification since the Space Shuttle.

In Spring 2021, the Resilience crew will depart the ISS aboard Resilience and return to Earth just off the coast of Florida. Their return will mark the longest human space mission launched from U.S. soil to date.