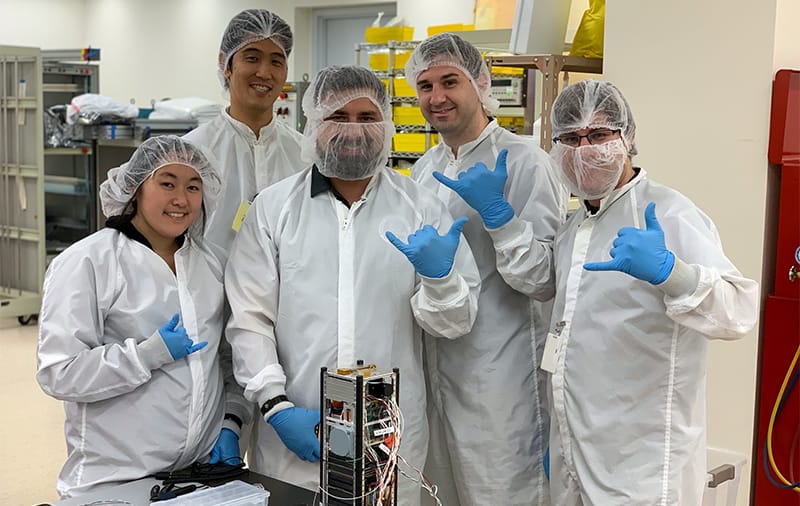 Above: Students who worked on the Neutron-1 cubesat. Credit: HSFL.

In 2007, the Hawai‘i Space Flight Laboratory (HSFL) was created to design, build, test, launch and operate small satellites (<100 kg) from the Hawaiian Islands. Similar to PISCES, the goal of HSFL and its parent organization, the Hawai‘i Space Grant Consortium (HSGC), is to promote an aerospace economy in Hawai‘i and train a home-grown aerospace workforce. HSFL and HSGC support roughly 120 to 135 undergraduate student internships annually of which 55% are underrepresented students (mostly Native Hawaiian) and 30% are women.

HSFL is currently working on a number of small satellites. Delivered in 2015, the 50 kilogram HiakaSat was HSFL’s first remote sensing satellite built by State of Hawai‘i staff and students. Unfortunately, due to a launch failure, HiakaSat did not reach orbit. HSFL has just delivered the four-kilogram Neutron-1 satellite (see article in this newsletter) to NASA for launch from the International Space Station later this fall. Neutron-1 also features a communication system that can be used by HAM radio operators for testing and will be operated using a ground station installed at and operated by Kaua‘i Community College.

Hyperspectral Thermal Imager represents the third HSFL satellite that will feature a highly-sensitive infrared detector from NASA JPL and will be delivered for launch in 2021. Finally, HSFL is involved in three projects to economically build small 1-U satellites (roughly one kilogram) for educational and testing purposes, including a satellite-building project assisting students and staff from the Hawai‘i Science and Technology Museum on the Big Island.

While small satellites can provide global coverage, very high altitude Unmanned Aerial Systems (UAS) can use the same small satellite technology much closer to Earth. Flying at above 60,000 feet, the latest solar-powered UAS, such as the HAPSMobile Hawk30, can continuously fly for six to 12 months and provide important data for disaster research of wildfires, volcanoes and hurricanes.

HSFL will continue to provide hands-on aerospace research opportunities for Hawai‘i students. Using the 1-U CubeSat satellite kit that is now being developed by Dr. Frances Zhu as part of NASA’s Artemis Program, HSFL will partner with PISCES to offer Big Island students the opportunity to build, test and operate their own small satellites in space. Space-rated components remain very expensive, and Hawai‘i has an opportunity to offer high-paying and high-technology jobs in aerospace.