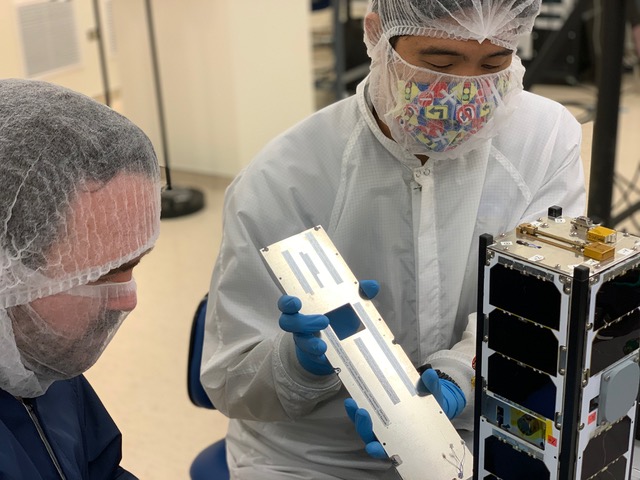 Above: Students adding a solar panel to the Neutron-1 3U cubesat inside a cleanroom at HSFL. The inside panel contains labels with the names of all the students and faculty involved. Credit: HSFL.

After six years in development, a small satellite built by the Hawaiʻi Space Flight Laboratory (HSFL) is set for launch. Neutron-1, a 3U cubesat outfitted with a neutron detector, will hitch a ride to the International Space Station on Sept. 30 aboard NASA’s ELaNa 31 resupply mission from Wallops, Virginia. The launch is part of NASA’s CubeSat Launch Initiative, which provides free rides to space for small satellites.

Neutron-1 is a joint project involving 32 University of Hawaiʻi at Mānoa students and 16 HSFL faculty members and engineers. A team at Arizona State University led by planetary scientist Craig Hardgrove provided the neutron detector. Names of the participating students and faculty will ride with Neutron-1 to space, printed on labels fixed on the back of a solar panel.

Dr. Migues Nunes, systems engineer for Neutron-1 and deputy director of HSFL, called the project’s completion “a great testament to the determination of the HSFL team to deliver a satellite during challenging times.” Due to disruptions created by the pandemic, many satellite teams were unable to deliver their planned projects in time for the mission

On Aug. 20, the cubesat was delivered for final flight integration to Nanoracks—a company providing commercial access to space for small research payloads. Nanoracks has successfully brought more than 1,000 research payloads and small satellites to the ISS, according to the company’s website.

Neutron-1 is expected to be operational in space in mid-November, once astronauts aboard the ISS configure the satellite’s deployment system. The mission will investigate global neutron counts while serving as a hardware and software flight verification and validation.

“We had some epic challenges during this process but at the end we came through and we could not be happier with the results,” Dr. Nunes wrote in an email lauding the team’s efforts. “Neutron-1 went through a rigorous environmental testing process and at the Nanoracks delivery we demonstrated that the whole system was working nominally and it’s all set to operate in orbit.”