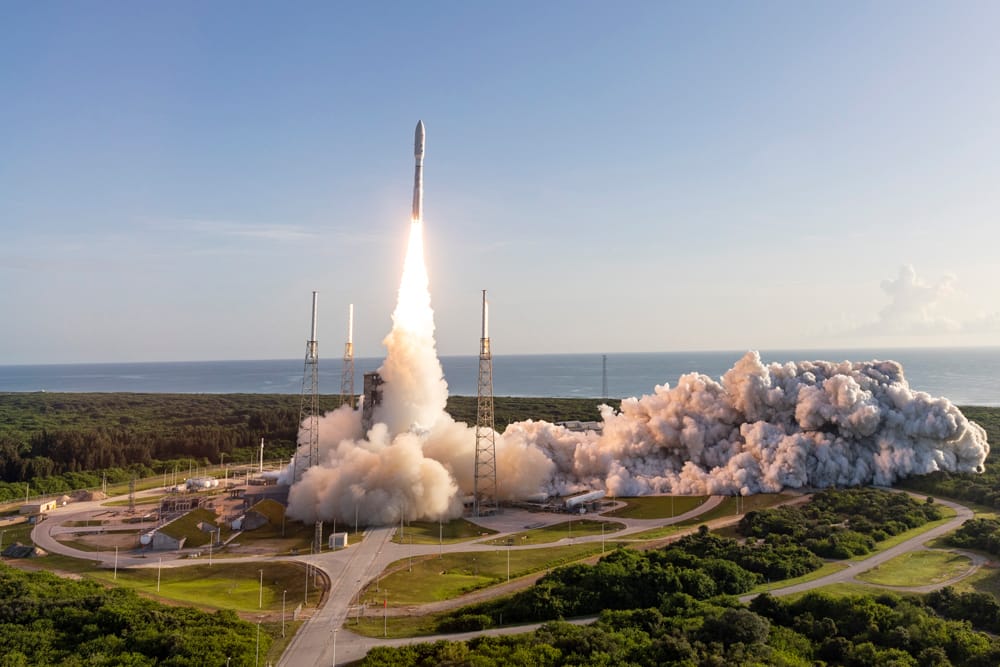 The most advanced planetary rover ever built is on its way to Mars. NASA’s Perseverance rover successfully lifted off from Cape Canaveral Air Force Station in Florida atop a United Launch Alliance (ULA) Atlas V rocket on July 30, 2021, along with its sidekick Ingenuity, a prototype Mars helicopter.

Perseverance has a big mission ahead: collecting Martian surface samples to send back to Earth, searching for signs of ancient life, and conducting next-level scientific research. The car-sized rover will also be deploying the first-ever planetary helicopter for a test flight, paving the way for technologies that could one day support crewed surface missions.

“The spacecraft is on it’s way to Mars with all subsystems operating nominally,” said Heather Bottom, a NASA JPL spaceflight engineer who lives in Hilo, Hawaii. “It’s completed over one percent of its six-month journey with two-way communication over the Deep Space Network. We’re now preparing for a handful of hardware checkouts, turns and planned trajectory correction maneuvers that will occur before landing on Mars.”

Before the surface mission begins, Percy must overcome the next big challenge of a successful landing. When it arrives in seven months, NASA engineers will endure the “seven minutes of terror” when the rover will be out of contact during entry, descent, and landing. Like its predecessor Curiosity, Percy will touch down using a rocket-powered sky crane—a proven technology that, until recently, was the realm of science fiction. NASA has targeted Jezero Crater for landing, an area believed to have had a lake and river delta many eons ago.

While Percy’s predecessors Curiosity and Opportunity assessed the geological characteristics of the Martian surface, Percy will dig deeper to analyze the chemical makeup of the surface and look for possible carbon-based molecules—signatures of life as we know it. The rover will also gather rock and soil samples to return the first pieces of Mars back to Earth. NASA and the ESA are planning a joint mission to return these samples as early as 2031.

Percy’s sidekick, Ingenuity, will be the first planetary helicopter to fly the Martian skies. Over the course of one Earth month, the copter will attempt five flights to assess its capabilities, and hopefully lay the groundwork for future airborne vehicles. Small helicopters could provide aerial views for rovers and human crews, transport for small cargo loads, and access to hard-to-reach areas.

In addition to seven scientific instruments and two dozen cameras, Percy is equipped with a machine called MOXIE, or Mars Oxygen In-Situ Resource Utilization. As the name suggests, it is designed to generate oxygen from Mars’ carbon dioxide-rich atmosphere to produce breathable air for astronauts and rocket fuel one day.

Perseverance is not alone on its 350 million-mile trip to Mars. On July 19, the UAE launched its first-ever interplanetary mission, sending a Mar probe called Hope to the Red Planet. Four days later, China launched its first Mars orbiter, lander and rover mission, called Tianwen-1. The three spacecrafts are all slated for arrival in February next year.

Based on the design of its predecessor Curiosity, the Perseverance rover’s development was eight years in the making. The rover’s mission is part of the U.S.’s larger Moon and Mars exploration strategy which aims to prepare the way for human exploration.