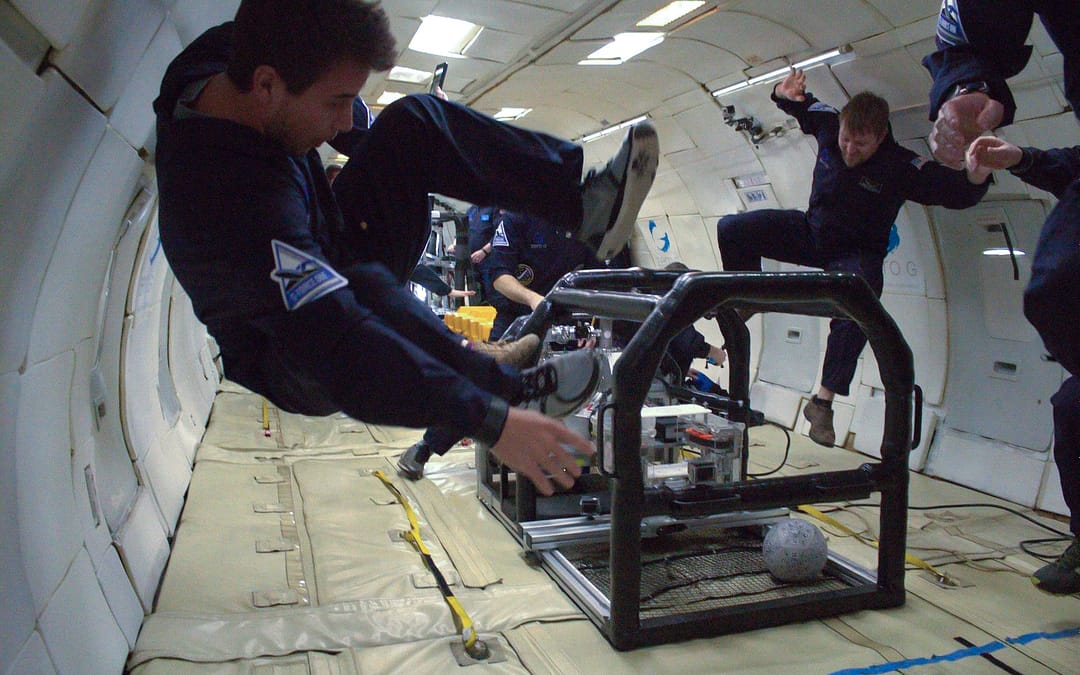 By: Dr. Frances Zhu, Hawaii Institute of Geophysics and Planetology

During my PhD, I had the pleasure of flying in two micro-gravity flight campaigns to demonstrate a spacecraft docking mechanism consisting of magnets and superconductors. I had been developing this technology (called a flux-pinned interface) for three years together with my team at Cornell University, the Space Systems Design Studio led by Dr. Mason Peck, and at NASA’s Jet Propulsion Laboratory, led by Dr. Laura Jones-Wilson. Both flight campaigns were made possible through Zero-G, a commercial micro-gravity flight provider.

Prior to the flight, we went through a series of reviews that increased in rigor to ensure the experiment would not shatter into pieces in the unlikely event of a crash. We packed our humongous, 300-pound testbed into a shipping crate and sent the hardware to Sanford, Florida. In the first week of March 2017 (one week prior to the actual flight), I arrived in Sanford to perform hardware checkouts with a fellow JPL engineer, Dr. Ian McKinley. We spent long days at the hangar performing every functionality and safety check on our testbed. The rest of the team joined us closer to the flight date to rehearse dry runs of the experiment. Because each microgravity section lasts only 30 seconds, and our bodies are running on a lot of adrenaline, the flight operators can easily forget the order of operations.

We were scheduled to fly on two days, thirty parabolas each. On day one, we waited in the hangar to ensure the weather would comply and we were cleared to fly in our allotted airspace of around 32,000 feet over a 15-mile strip. The planes that fly parabolas are notoriously called “Vomit Comets”. Many of us wore motion sickness patches behind our ears that would slowly release medicine to numb our inner ears from sensing wild shifts in acceleration. We also carried bottles of anti-nausea and anti-motion sickness pills for quick release during flight. Once clear, we loaded our experiment into the empty, white-padded hull of the plane. About thirty minutes later, we had reached altitude and the pilot issued a notice of “steady flight” over the intercom. We briskly popped out of our seats and began setting up the experiment amid the deafening sound of the plane’s jet engines.

When the parabolic segments of our flight began, we were all sitting or lying on the ground. As the pilot pulled on the plane’s yoke, we could feel the increase in gravity from 1G to 2Gs over 30 seconds. As the pilot rounded the bend at the peak of the parabola, we felt the transition from 2Gs into 0G. We were weightless! My team propped up both spacecrafts in the testbed and released them toward one another to demonstrate a docking maneuver. After a few attempts, the spacecrafts successfully docked in the microgravity environment. When the spacecrafts joined, our team cheered and floated along with the experiment testbed.

Both flights were an amazing experience—first and foremost to demonstrate that this novel technology would indeed work in orbital conditions—but also as a fun and rewarding team experience. I think back fondly on what a dozen engineers achieved and the ways it may impact the future of technology.