Masten Space Systems: Preparing for a Long-Term Presence on the Moon 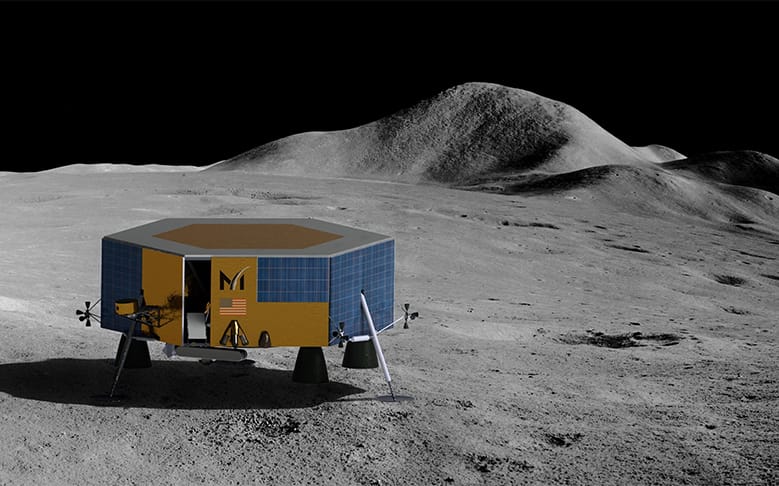 Above: An artist rendering of Masten Space Systems’ XL-1 lunar lander which is slated for a Moon landing in 2022 carrying cargo for NASA. Courtesy image.

In December 2022, Masten’s XL-1 lander is scheduled to land on the Moon, carrying payloads for NASA and other commercial customers to the lunar South Pole. As part of NASA’s Artemis program, the purpose of these experiments is to collate localized, concurrent data sets from the lunar polar region in advance of human missions to the Moon. This mission is one of the first steps toward building a foundation for public/private partnerships that will establish a sustainable and long-term human presence on the lunar surface.

One of the risks posed by lunar landings is the plume cratering and ejecta kicked up by vehicle engines during descent. Large engines can dig deep craters and throw ejecta up that can damage the vehicle or even make it to the reaches of lunar orbit. With the Artemis program using larger landers than the Apollo missions, this is a problem worth studying as humans head back to the moon in 2024. One way to make landings safer is by using landing pads, which minimize the amount of regolith and dust displaced during launch and landing.

PISCES has been working to mitigate this risk by developing landing pad pavers made with sintered Hawaiian basalt. Hawaii’s basalt is similar to lunar regolith and can be used as a regolith simulant. PISCES teamed up with Masten earlier this year to test one of its designs using a Masten rocket engine. This work was done in support of a NASA Phase I SBIR and the Plume Surface Interaction group. The results were extremely encouraging, demonstrating good resistance to plume effects and erosion durability for high velocity and high temperature plume impingement at approximately 25% of the surface heat flux value experienced during the Apollo landings. This test data will help PISCES and NASA develop improved designs which one day may be used on the Moon.