16th ‘Journey Through The Universe’ Shares Hands-on Science With Students 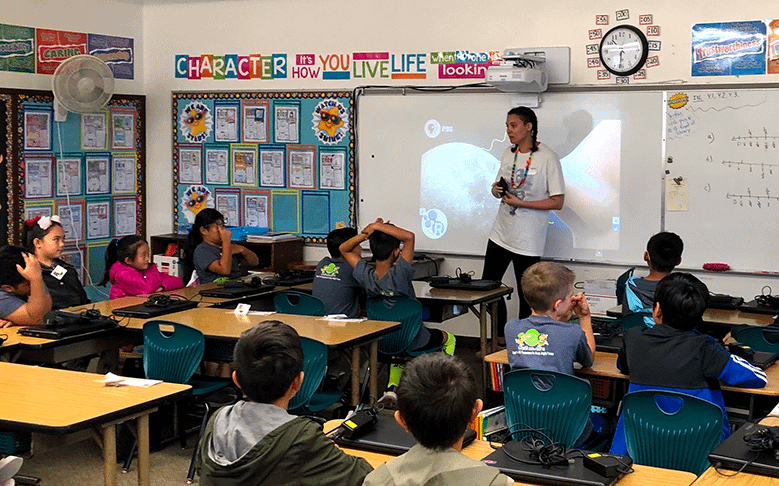 Above: PISCES geologist Kyla Edison gives students at Waiākeawaena elementary school an imaginary taste of life on the Moon during Journey Through The Universe week.

PISCES staff visited several classrooms in East Hawaiʻi during the 16th annual Journey Through The Universe (JTTU) week in March to show students what it would be like to live on the Moon.

JTTU is an annual, week-long STEM initiative involving more than 70 space and science professionals who visit classrooms to promote and encourage science literacy.

“Two of the scientists I saw today in classrooms commented that they knew they wanted to be scientists when they were eight years old!” Hawaiʻi DOE Deputy Superintendent Phyllis Unebasami said in a news release by Gemini Observatory. “When I heard that I thought, ‘and here they are now sharing their love and knowledge with our 8-year-olds.’ That is truly impactful.”

Kyla was among 74 astronomers, scientists, engineers, and educators who participated in JTTU. The week-long intensive includes teacher workshops, classroom visits and activities, public lectures, and family science nights. This year, the program reached some 8,000 students in North and East Hawaiʻi schools throughout Hilo, Hāmākua, and Waimea.

JTTU was developed by the National Center for Earth and Space Science Education and began in 2004 in Hawaiʻi as a partnership between Gemini Observatory and the State Department of Education. Hawaiʻi is one of only 10 communities nationwide designated for JTTU. The program has reached more than 60,000 students since its inception.