Astronauts Share Tips on Coping with Isolation Amid Pandemic 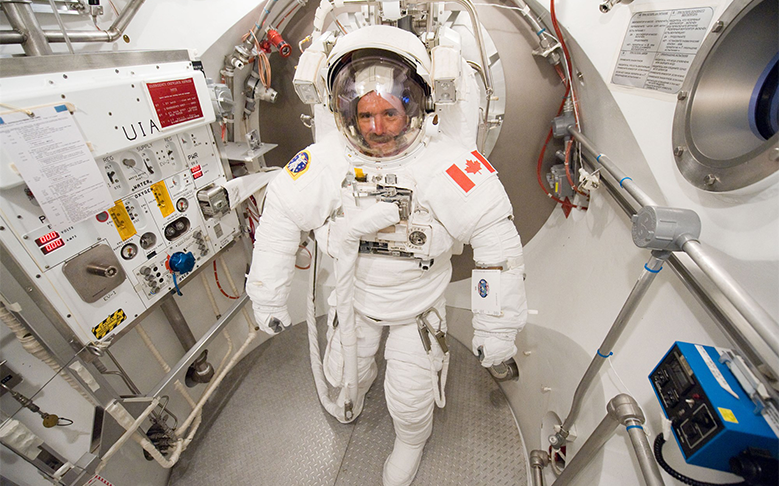 Above: Canadian astronaut Chris Hadfield suited up inside the International Space Station. Hadfield spent five months aboard the ISS between 2012 and 2013, serving as Commander. Credit: Mark Sowa/NASA-JSC.

Astronauts may be among the most qualified people on Earth to give advice about coping with isolated living situations. And several have come forward with advice to the hundreds of millions of Americans ordered to stay home amid the growing COVID-19 pandemic.

Astronaut Christina Koch, who recently returned from the ISS after a record-breaking 328-day stint (the longest spaceflight by a woman), lived and worked at the South Pole for two winters while traveling the artic and Antarctic regions between 2004 and 2007. She experienced the extremes of sensory deprivation, far-flung isolation and back-to-back months without sunshine, family or friends.

“The way to think about this new normal is to look at it as if it were a new planet to explore,” she said in a Washington Post article. Koch underscored the importance of bridging the divide between people by creating shared, meaningful experiences through video conferencing including games, music and other interactive activities. “There’s something to be said for actually doing the same things at the same time.”

Chris Hadfield, a Canadian astronaut who served as Commander aboard the ISS (who is perhaps famously known for performing his own version of David Bowie’s Space Oddity in space), shared practical steps for staying productive in a YouTube video last month. First, he said, understand the risk. “Don’t just be afraid of things, get credible information and find out what you are facing.”

Hadfield advised becoming an expert on the virus, monitoring the threat level in the nearby area and acting accordingly to minimize any risk of exposure. He also recommended getting clear on personal objectives, obligations and situational constraints, followed by a course of action. “This is a chance to do something different which you may have not done before.”

Retired NASA astronaut Scott Kelly shared his thoughts in a New York Times op-ed, prescribing a daily routine to help people adjust to the new normal. Kelly, who spent nearly a year aboard the ISS, said a regular sleep schedule is especially important for maintaining one’s well-being. Kelly also advised that people pace themselves with work and take time out for fun. He recommended taking up hobbies like music or art, and keeping a journal—a scientifically proven method for improving emotional well-being in isolated situations.

“The spread of the coronavirus is showing us that what we share is much more powerful than what keeps us apart, for better or for worse,” Kelly wrote. “All people are inescapably interconnected, and the more we can come together to solve our problems, the better off we will all be.”