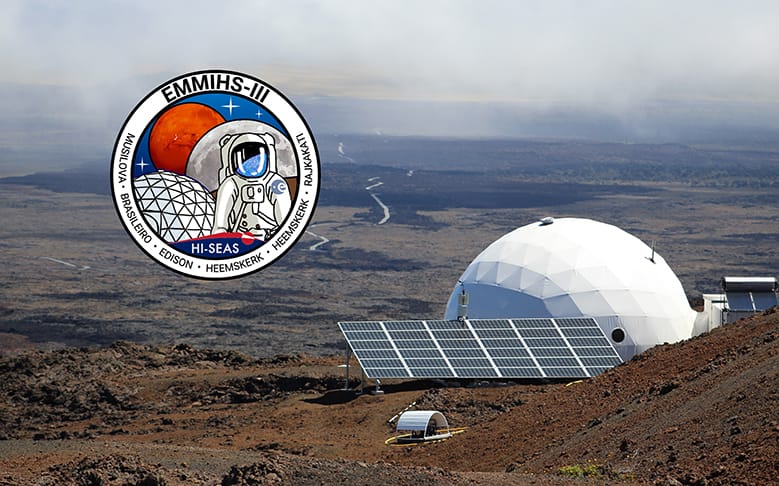 Above: The Hawai‘i Space Exploration and Analog Simulation (HI-SEAS) is a dome-shaped habitat nestled on the rugged volcanic landscape of Mauna Loa where teams of scientists research space exploration through simulated off-world missions.

PISCES will join a simulated astronaut mission later this month as part of a European Space Agency (ESA) initiative researching the technological and social challenges of living beyond Earth. Geologist and materials science tech Kyla Edison will be one of six crew members staying inside the HI-SEAS (Hawai‘i Space Exploration and Analog Simulation) habitat on Mauna Loa volcano for two weeks, living and working like an astronaut on another world.

Beginning on Jan. 18, the crew will have little contact with the outside world and practice protocols simulating the life of a lunar/Martian explorer. They will cook with freeze-dried foods, conduct research, and wear spacesuits whenever they exit the habitat for EVAs (Extra Vehicular Activities).

Kyla plans to research how basalt sintering for in-situ resource utilization (ISRU) is affected by high-altitude environments. She will analyze the crystal and mineral composition of samples from neighboring lava flows and experiment with sintering them at various temperatures in a mini kiln. She hopes to determine which samples produce a viable material for ISRU applications beyond Earth (such as launch/landing pads, shelter, berms, and tools). Kyla speculates that the 8,200-foot altitude will likely affect the sintering temperature needed to fuse basalt. Overall, she hopes to find an optimal thermal profile that produces a durable material, and gain insight into how the process might be adapted in space.

The mission (dubbed EMMIHS-III) will be the third organized by ESA’s EuroMoonMars initiative. The first simulation launched in February 2019; the second in December 2019. Crews of the previous missions conducted geological and drone surveys, lava tube exploration, and space technology tests.

HI-SEAS is a proven testing ground for Mars analog simulations and has hosted five long-term NASA studies ranging from four months up to a year. The latest missions are shorter but have a broader focus, including both the Moon and Mars. They are being conducted in partnership with ESA’s International Lunar Exploration Working Group (ILEWG), the International Moonbase Alliance (IMA), and HI-SEAS.