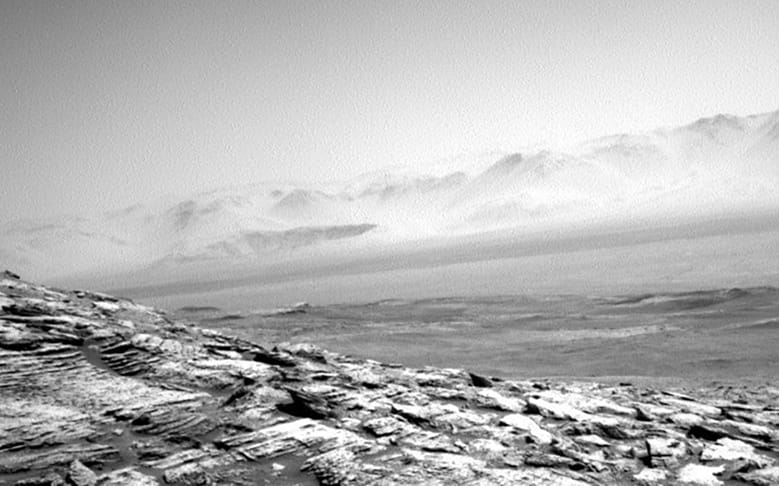 Above: An image of Central Butte inside Gale Crater on Mars captured by NASA’s Curiosity rover. PC: NASA/JPL-Caltech.

The image shown above is one of 24 captured by the Mars Curosity rover during the dust devil panorama survey. The survey took three images in eight different locations on the Martian surface in the hopes of capturing a dust devil. I sent the command to take this image during my Engineering Camera Payload Uplink Lead (ECAM PUL) shift at NASA-JPL. During this shift, scientists and PULs managing all the instruments aboard Curiosity get together to plan and send commands to the rover.

There are 12 engineering cameras on Curiosity: four Navigational Cameras (navcams), four Front Hazard Cameras and four Rear Hazard Cameras. The navigational cameras can be used for science (e.g. dust devil surveys), navigation (drive direction imaging) and documentation (rover part imaging). The hazard cameras can also be used for science and navigation, but they’re mostly used to make sure the rover isn’t in a hazardous position and about to slip or something.

Camera temperatures, sun position and image compression are some of the many factors I have to consider when taking ECAM images. Just like ECAM, each instrument comes with its own factors to consider. The PULs for each instrument need to make sure their instrument can optimally execute the plan that scientists set out for the rover. Some shifts feel like one big game of twister where you have to adjust the schedule to satisfy one of your constraints, but in a way that doesn’t get in the way of another instrument’s constraints. When all the planning is settled, the commands get sent to the rover and images come back.

Another part of my job is the Payload Downlink Lead (ECAM PDL) and Operational Product Generation Subsystems (OPGS). If ECAM PUL is throwing, ECAM PDL is catching. With ECAM PDL, we make sure that all the commands we send to the rover are executed as expected, and all the images we expect are received. Using the images we receive, OPGS creates products like meshes and mosaics so the people in charge of navigation know where the rover is and where they want to go. This is how we pieced together that “haunting” image I took on Mars.

Aaron Roth is a Waiākea High School graduate and former PISCES intern who developed the stereoscopic imaging system on the Helelani planetary analog rover. After receiving his Bachelor’s in Computer Science from Arizona State University in May 2019, Aaron accepted a position at NASA’s Jet Propulsion Laboratory in Pasadena, California, working on the imaging systems for NASA’s Curiosity rover.