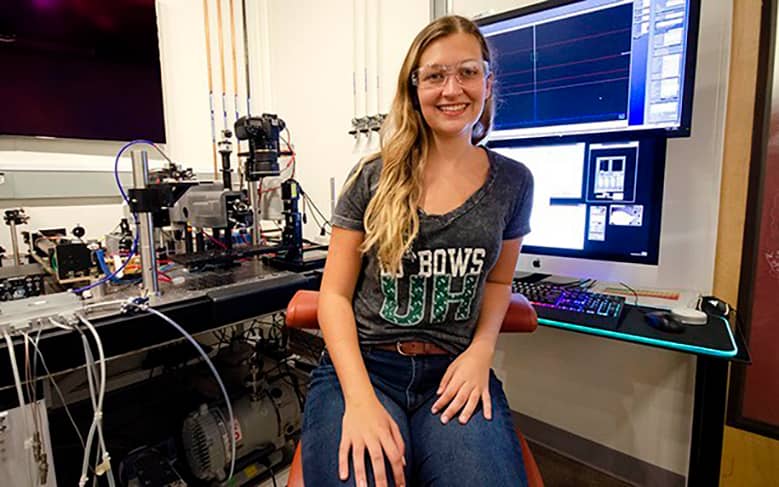 Above: University of Hawaiʻi at Mānoa undergrad Schelin Ireland at her NASA-JPL workstation where she ran tests on SHERLOC. Photo: NASA-JPL-Caltech/Kim Orr.

A UH Mānoa geology and geophysics student and STARS program alumnus spent the summer helping NASA prepare a life-hunting instrument for the Mars 2020 rover mission. Schelin Ireland of Kailua-Kona interned at NASA’s Jet Propulsion Laboratory in Pasadena, California as part of a team working on SHERLOC, or the Scanning Habitable Environments with Raman & Luminescence for Organics & Chemicals instrument.

During her internship, made possible through a Hawaiʻi Space Grant, Ireland tested the prototype version of SHERLOC in the lab, making calibrations to prepare its successor for launch. She also applied her geology knowledge, compiling a database of organic and inorganic materials that will help researchers interpret the data they receive from the Mars 2020 rover once it arrives on the Red Planet.

SHERLOC will be the first Mars instrument capable of detecting and extracting data from microscopic particles for signs of life. Up until now, NASA’s Curiosity rover has been using infrared spectroscopy to study the Martian surface. SHERLOC uses UV Raman spectroscopy, beaming a laser at samples of interest to seek out signs of biological life—now or in the past.

Ireland’s NASA internship aligned perfectly with her future goals. In a NASA interview, she said she aspires to be a planetary scientist and astronaut—she graduated from Konawaena High School, the same school attended by Hawaiʻi’s first astronaut.

“One thing that inspired me when I was in high school was knowing that I attended the same high school as Hawaiʻi’s first astronaut, Ellison Onizuka,” she said in the interview. “It would be an honor to follow in his footsteps and become Hawaiʻi’s first female astronaut.”

“The PISCES STARS program was a very important experience for me to find what I am passionate about in science,” Ireland said. “It has led me to choose a path and has helped guide me in the directions I want to move towards, including getting the internship at NASA JPL.”

The staff at PISCES is thrilled to see Ireland moving toward her dreams and contributing to the next big Mars mission. Congratulations!