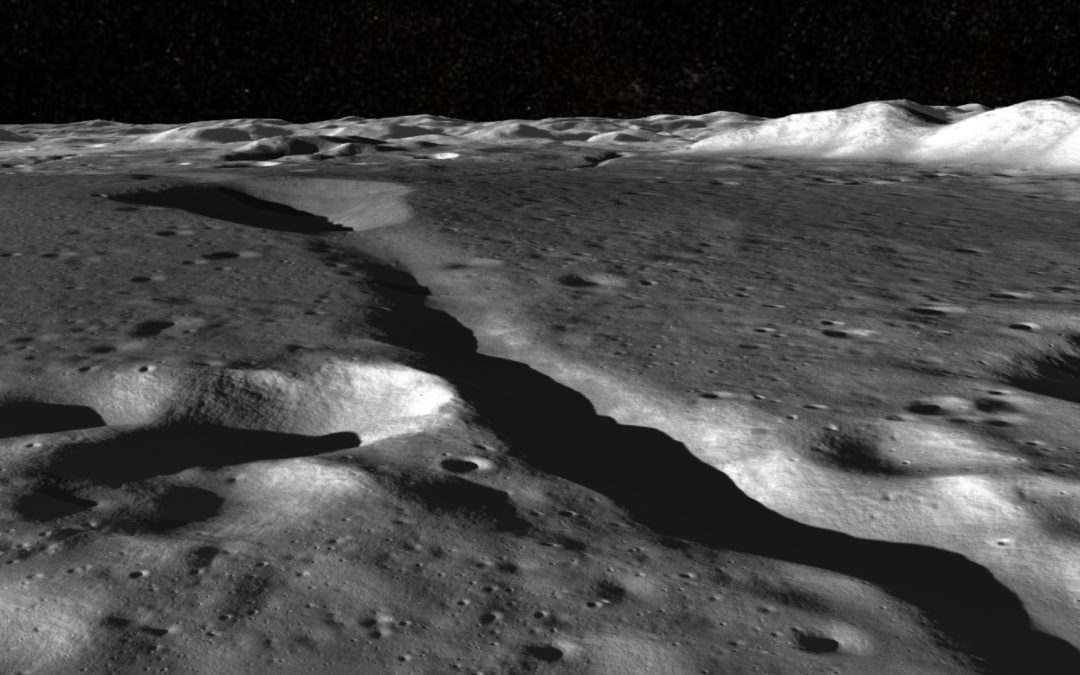 Above: The floor of the Moon’s Schrodinger Crater as visualized with NASA’s Moon Trek portal. PC: NASA-JPL.

NASA’s Solar System Trek online portals provide web-based suites of interactive visualization and analysis tools enabling mission planners, scientists, students and the public to explore planetary surfaces as seen through the eyes of many different instruments aboard many different spacecrafts. The project is managed by NASA’s Solar System Exploration Research Virtual Institute (SSERVI) and developed at NASA’s Jet Propulsion Laboratory. The portals present a vast collection of mapped data products from past and current missions for a growing number of planetary bodies. As web-based toolsets, the portals do not require users to purchase or install any software beyond current web browsers. The interactive and immersive capabilities of these portals are being used for site selection and analysis by NASA and its international partners supporting upcoming missions. They are also being used by formal and informal educators, students from elementary through university levels of study, and members of the public engaged in the excitement of solar system exploration.

The portals provide easy-to-use tools for browsing, data layering and feature search including detailed information on the source of each data product. Interactive maps include the ability to overlay a growing range of data sets including topography, mineralogy, elemental abundance and geology. They provide analysis tools that facilitate measurement and study of terrain including distance, height and depth of surface features, and allow users to easily find and access the geospatial products that are available. Users can drill down to find the PDS data used to produce geospatial products. Data products can be viewed in 2D or 3D and can be stacked and blended, rendering optimal visualizations revealing details that no single data set can show. Data sets can be plotted and compared against one another. In addition to keyboard and mouse control, standard gaming and 3D mouse controllers allow users to maneuver first-person visualizations of flying across planetary surfaces. The portals also provide users the ability to specify any area of terrain for generation of STL/OBJ files that can be sent to 3D printers to make 3D models.

The new Virtual Reality Extension is an exciting addition to the Solar System Treks. Users can draw a path across the surface using the browser interface. A QR code is then generated which is read by the user’s smart phone. Placing the phone in an inexpensive set of Google Cardboard-compatible goggles, the user then flies along their specified path in virtual reality.

The current list of released portals allows users to explore the Moon, Mars, Mercury, the dwarf planet Ceres, the asteroid Vesta, Saturn’s largest moon Titan, and seven of Saturn’s smaller icy moons. More portals are in development including the near-Earth asteroids Ryugu and Bennu and Mars’ largest moon, Phobos. Unified access to all the portals along with supporting content is provided through the project’s home site at https://trek.nasa.gov.