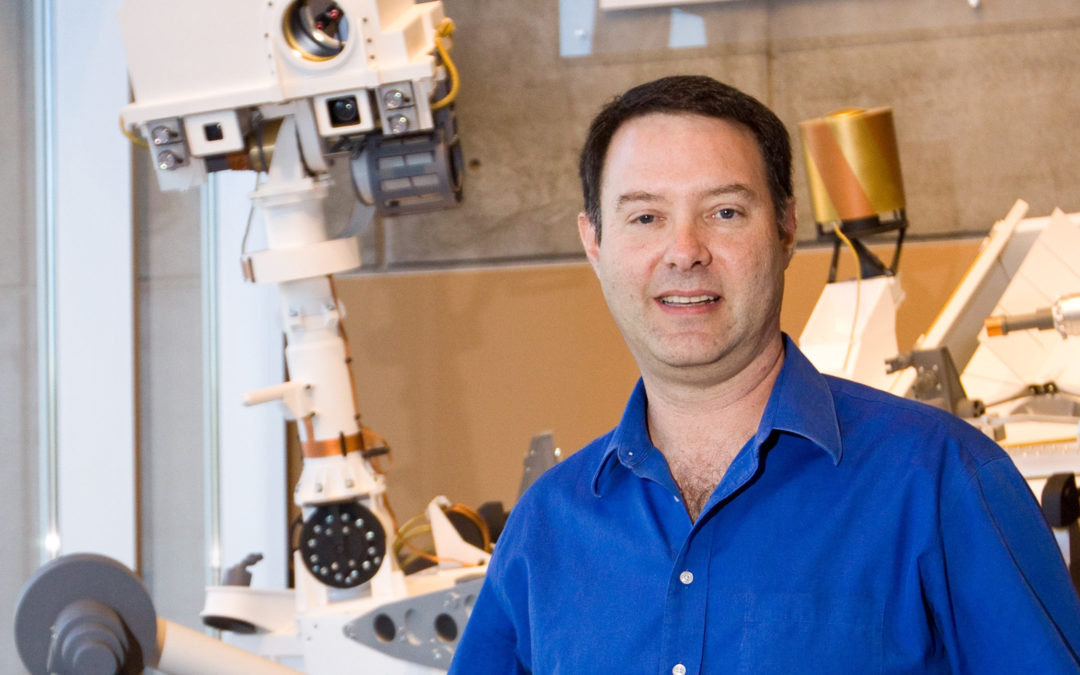 Above: Dr. Jim Bell is a professor and planetary scientist in the School of Earth & Space Exploration at Arizona State University, and the Principal Investigator for the Mars 2020 rover’s Mastcam-Z imaging system. He is also an author of popular science books and has been heavily involved in the previous Spirit, Opportunity and Curiosity rover missions. Courtesy photo.

NASA’s next Mars rover is scheduled to launch in mid-July next year and will land on the Red Planet in February 2021. Currently called “Mars 2020” (until it receives a proper name from the nationwide naming contest currently underway), the rover is made up of about 90% spare parts leftover from building the Curiosity rover. Despite looking outwardly similar to Curiosity, Mars 2020 has a very different science payload and mission. One of the new instruments is a color, stereo imaging system called Mastcam-Z. These cameras are similar in many ways to the color cameras called Mastcam on the Curiosity rover, but they have the added capability of zooming from wide angle to telephoto (hence the added “Z” for zoom).

Stereo imaging for these robotics vehicles is a critical element of mission operations. Stereo photos are used inside the rover’s computer system and on the ground to create 3D “Digital Terrain Models” or DTMs. The rover’s onboard software uses these DTMs to navigate between commanded waypoints, helping to identify obstacles that the rover should avoid. DTMs are also used by ground controllers (the engineers who drive the rover) to navigate the rover to places the science team wants to explore, and to place the robotic arm and instruments on rock and soil targets along the surface. Finally, DTMs are also used by the science team to understand the topography and geology of the region the rover is traversing through.

Processing these images requires specialized software that has undergone a lot of development using Earth-based systems. These include specially designed imaging systems like those developed at the aerospace agency PISCES in Hilo, Hawaii. PISCES and similar programs around the world address the latest hardware and software problems in planetary robotics, providing solutions to NASA and other space agencies.

On the Mars 2020 rover, Mastcam-Z will help infer the composition of Martian surface materials and guide decisions on where to drill and take measurements using the rover’s instruments. Unlike Curiosity, Mars 2020 is outfitted with a coring drill to collect samples of rock and soil and store them in small “cache” tubes. A major goal of the Mars 2020 mission is to place these tubes where a future rover can fetch them, launch them into Mars orbit using a special ascent rocket, and transfer them to an orbiter for return to Earth. As such, the Mars 2020 rover is the first step in a planned robotic Mars Sample Return program that NASA is planning to conduct in the 2020s. Detailed analysis of these samples back on Earth will provide important clues about the past habitability of the planet, as well as important engineering information needed to successfully plan human missions to Mars—hopefully in the 2030s.

Learn more about NASA’s Mars 2020 rover and its mission to the Red Planet at: mars.nasa.gov/mars2020.