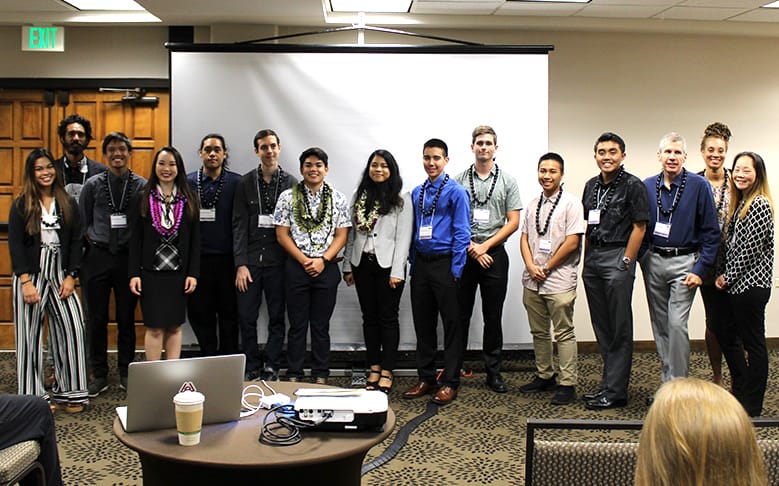 Above: Fifteen Akamai program students working in East Hawai‘i finished their eight-week summer projects with a series of visual presentations at the 2019 Akamai Symposium on Aug. 14 in Hilo.

More than a dozen students presented the results of their work in the Akamai internship program during the annual symposium last month in Hilo.

The event opened with several speakers including an assistant professor of astronomy at University of Hawai‘i at Hilo, Heather Kaluna. Kaluna noted that she was once an Akamai intern herself.

The students were among the largest Akamai cohort to-date, with 42 involved in projects on Hawaiʻi island, Maui and California in 2019. The group—nearly twice as many students as usual—was largely supported by the Thirty Meter Telescope, which provided about half of Akamai’s funding this year. Akamai also received funding from Hawai’i Community Foundation’s Career Connected Learning Program, W.M. Keck Observatory, Daniel K. Inouye Solar Telescope, University of Hawai’i at Hilo, Canada-France-Hawai’i Telescope and the Air Force Office of Scientific Research.

Led by the Institute for Scientist & Engineer Educators at University of California, Santa Cruz, Akamai helps students develop skills and experience in Hawai‘i’s technical and scientific fields. The program received national recognition last year for its efforts to meet local workforce needs in astronomy, remote sensing and other related industries.

Akamai partners with a range of organizations and companies to create projects that are productive for the host sites and educational for students. In addition to science and engineering projects, Akamai students receive training in communication for formal and informal interactions. Surveys show 87% of students who participate in Akamai stay on a STEM-related pathway. More than 150 of the 427 interns who have worked with Akamai since 2003 are currently in STEM jobs; more than two-thirds of them work in Hawai’i.