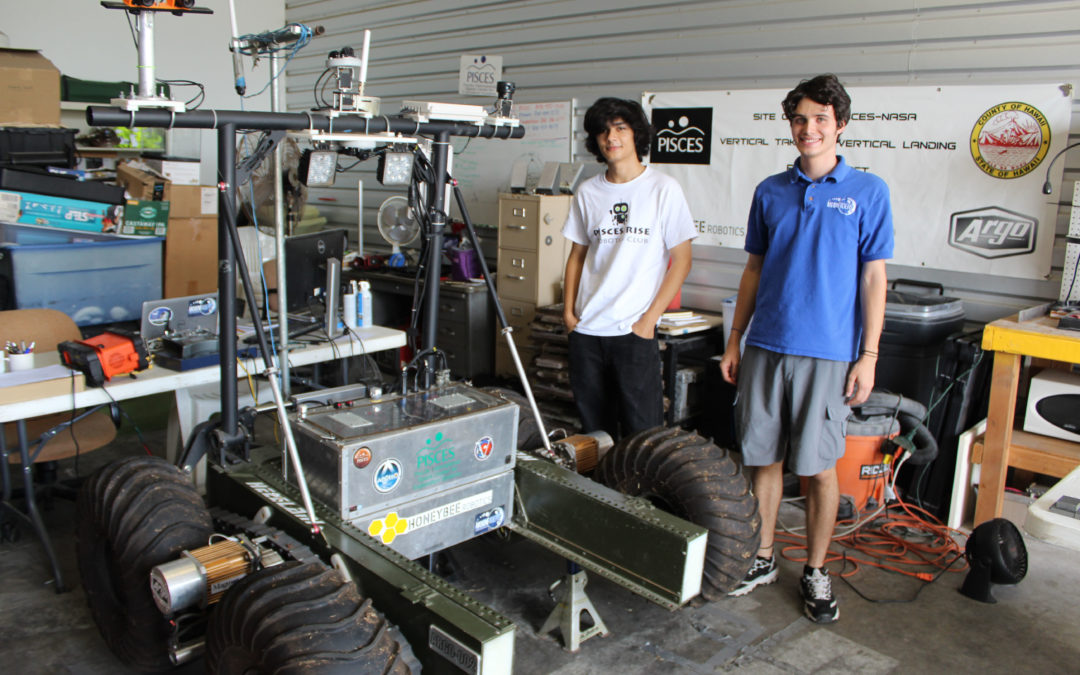 A cohort of four Hawaii-based students interning with PISCES wrapped up their projects in robotics, engineering and materials science last month.

Two University of Hawaii at Hilo students, Joel Paye and Alec Goodson, worked on the robotics team and recalibrated software systems aboard the Helelani planetary rover. Joel and Alec honed their coding skills, updating and validating the rover’s software systems, calibrating existing sensors, and adding a game controller option to the operating software’s graphic user interface. As a result, the battery life for the electronics power system was improved from an average of 90 minutes to eight hours.

Moving to a larger robotics projects was a natural step for both Joel and Alec. Joel has been a long-time mentor with the PISCES-RISE Robotics Team for Keaukaha youth and will continue guiding students during Fall 2019. Alec is a Kealakehe High School graduate who participated in the PISCES MoonRIDERS program, a project engaging local students with the design of a lunar flight experiment in partnership with NASA.

Joel and Alec are among dozens of students who sharpened their tech skills with Helelani. Since 2013, interns have built and configured a variety of sensors, software and imaging systems aboard the 700-pound robot. These include remote operating capability from any computer connected to the internet, stereoscopic imaging, and 3D mapping of the rover’s surrounding environment using LiDAR (Light Detection and Ranging).

Though not flight ready, Helelani offers a mobile platform for testing space exploration instruments and continues to serve as a valuable learning tool for students. 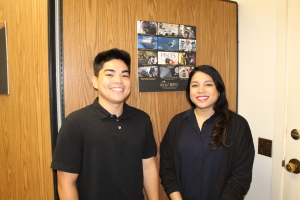 Jaynine designed and built a tethered reel system for PISCES’ unmanned aerial vehicle (UAV). The UAV is outfitted with a bait dispersion system to kill little fire ants in tree canopies, a project PISCES took up with the County’s Dept. of Research & Development. Jaynine’s design involved a spool assembly, DC motor, water pump and control circuit to regulate the reel tension, providing slack or resistance as needed. A hose served as the tether, carrying insecticide to the UAV in flight, reducing the payload weight and increasing flight time. Jaynine’s design identified several bugs in the system, as well potential fixes for future implementation of the project. The next step in the project will be flight testing the UAV using the reel.

Joshua researched the structural properties of PISCES’ latest sintered basalt tiles, designing and executing various tests to assess their structural integrity, porosity and thermal conductivity. PISCES makes sintered basalt tiles using only volcanic basalt sourced from commercial quarries on Hawaiʻi Island. Joshua’s tests revealed that 1) sintered basalt is a good insulator among construction materials, nearing the properties of asbestos and concrete while exceeding those of brick; 2) higher sintering temperatures yield a stronger product while lower temperatures make a better insulator; 3) there is more work to do. To find out how sintered basalt will function in environments with little or no atmosphere, the samples need to be tested in a vacuum. PISCES is working to find other applications for sintered basalt, both on Earth and in space exploration.

Joshua’s test results suggest that sintered basalt materials are ideal for launch and landing pad construction on places like the moon and Mars where surface dust poses a serious threat to ground infrastructure. Landing pads would mitigate the effects of sandblasting generating by rocket engines when spacecrafts launch and land.

“My internship with PISCES gave me a great opportunity to work in my field of interest and learn about the future of human space exploration,” said Joshua following his seven-week internship with PISCES. “After this internship, I will take with me everything I learned about the project, and all of the connections I made with Akamai and PISCES to help carry my STEM career forward.”

Now moving into its eighth year, the PISCES internship program has mentored 44 students in projects in robotics, engineering, geology and materials science. The program supports Hawaiʻi-based college students interested in aerospace-related fields, helping them hone their knowledge and skills through hands-on research and development projects. Interns also get networking opportunities in the aerospace industry.