50 Years After Apollo: Remembering Hawaii’s Role in the Moon Landings 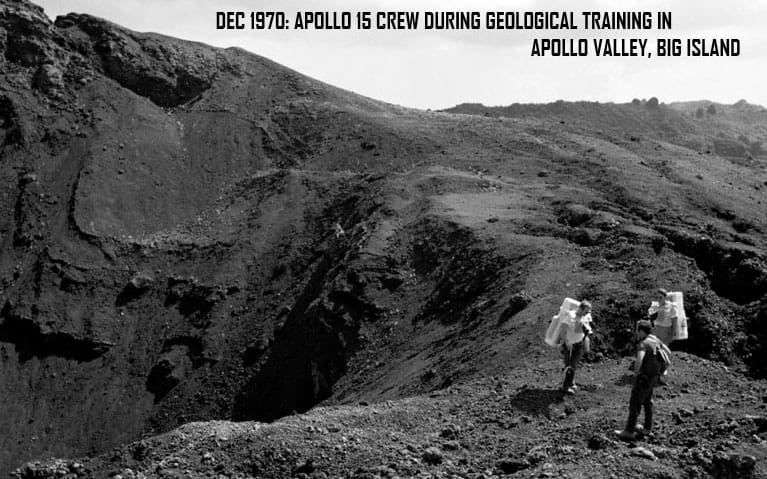 Above: In December 1970, Apollo 15 crew members survey “Apollo Valley” on Hawaiʻi Island during a geology training exercise in preparation for a lunar surface mission. Photo: NASA.

July 20th, 2019, marked the 50th anniversary of the historic Apollo 11 lunar landing, an event that defined a generation and established a groundbreaking precedent in the world of space exploration. Among the many contributors that made this historic accomplishment possible, Hawaiʻi played an important role, preparing astronauts for their journey to the Moon while actively supporting space flights as they happened.

Between 1965 and 1972, Apollo astronauts trained in the barren volcanic landscapes of the Big Island of Hawaiʻi: otherworldly terrain that continues to support space missions bound for the Moon and Mars. Apollo crew members conducted exercises in nine locations on the Big Island, including the slopes of Hualalai, Mauna Loa and Maunakea, as well as a variety of craters at the summit of Kīlauea.

During the Apollo 11 spaceflight, Kokeʻe Tracking Station on Kauai island relayed communications, maintaining contact between astronauts and mission control in Houston, Texas. When Neil Armstrong, Edwin “Buzz” Aldrin and Michael Collins had safely returned to Earth from their lunar visit, Hawaiʻi was the first place they set foot. The crew landed in the Pacific Ocean about 800 miles southwest of the islands, and were brought to Pearl Harbor with their spacecraft by a U.S. Navy aircraft carrier. There, they remained in quarantine for two weeks to prevent the spread of any potentially infectious diseases.

View more photos of the Apollo training in Hawaiʻi >>

Hawaiʻi’s supporting role in Apollo 11 was highlighted in 2014 by SCR 82, a resolution initiated by PISCES to recognize the Aloha State’s contributions to the Apollo program. The resolution deemed July 20, 2014, as “Tranquility Base Day” (named after the historic site where astronauts first set foot on the moon).

Fifty years later, NASA is now planning the Artemis program to return humans to the lunar surface in the 2020s. Artemis aims to establish a permanent human settlement on the Moon and infrastructure to support deep space missions to Mars and beyond.

Hawaiʻi’s unique geography and lunar-like terrain may once again support the next great space missions undertaken by humans, continuing a quest of exploration and discovery that led the first Polynesian voyagers to the Hawaiian Islands.