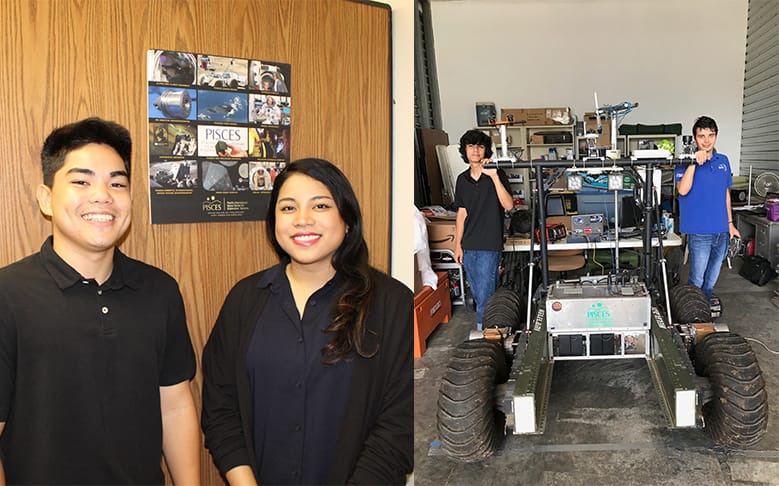 Above (Left to Right): PISCES’ summer interns – Joshua Tokunaga and Janine Parico during their first day on the job at PISCES. Joel Paye and Alec Goodson stand on either side of the Helelani planetary rover they are working on this summer.

From Kapahulu, Oahu, Joshua Tokunaga comes to PISCES through the Akamai internship program with the desire to work alongside people doing scientific research for a living and gain experience for a future STEM career. He is going into his fourth year at Arizona State University studying astrobiology and bio-geosciences. This summer, Joshua is working with PISCES’ Materials Science team to assess the structure and durability of sintered basalt tiles. He aspires to be a scientist researching terrestrial analog sites on Earth to advance knowledge in the field of astrobiology.

Alec Goodson is a Hawaii Island transplant from Eugene, Oregon who graduated from Kealakehe High School. Now in his fourth year studying computer science at University of Hawaii at Hilo, Alec participated in the PISCES MoonRIDERS program in high school. This summer he is working on the Helelani rover to improve its command systems and create an autopilot system. Alec said he wants to improve his programming skills with robots and hopes to one day work in AI development.

Joining Alec for the robotics development with Helelani is Joel Paye, a Hawaii Island native entering his fourth year at University University of Hawaii at Hilo. Joel is a computer science major and has been an active volunteer with the PISCES-RISE robotics club for Keaukaha youth since it began last year. This summer he will work on the Helelani rover to improve its movements and sensors and add game pad support. He said he intends to develop his programming skills and learn more about electrical engineering. Joel’s dream job is to become a software engineer.

Jaynine Parico is a Kapiolani Community College student who is working with PISCES through the Akamai internship program. Originally from Saipan, she is studying mechanical engineering with an interest in aerospace technology and will be developing the mechanical systems of PISCES’ unmanned aerial vehicle this summer. She hopes to develop her skills in mechanical and electrical engineering during the program and one day work as in engineer here in Hawaii.

PISCES employs local college students every summer to get hands-on, paid work experience in aerospace technology and related projects. Students who are either studying at a University in Hawaii or who return home from an out-of-state university during the summer months are eligible to apply. The agency also offers credit-based internships during the school semester to students studying electronics technology, engineering, programming, and other STEM fields.

Since 2014, PISCES has mentored 36 Hawaii-based college students. Many have gone on to work for organizations and companies like NASA, Apple and Google.