Above: Twelve Hawaii high school students from around the state spent a night on “Mars” at the HI-SEAS research habitat on Mauna Loa during the sixth-annual program in June.

PISCES wrapped up the sixth-annual Women’s STARS Program in late June, graduating 12 Hawaii high school women from around the state.

“I didn’t know how many STEM opportunities were available on the island and I learned a lot more about what is out there for me and about different fields I can pursue,” wrote one STARS student in her comments on the program this year. “This program has been an amazing experience and I really enjoyed traveling around the island to see all these incredible things and meet and hear from so many amazing people.”

“I already was sure I was going into science, but the STARS Program boosted my confidence and excitement tremendously,” another student commented. “It also gave me a more focused direction on where I want to be and how to get there.” 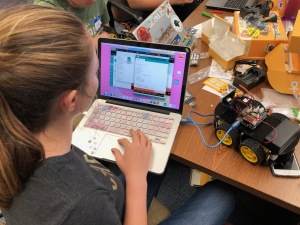 Though previously focused heavily on astronomy and aerospace fields, the STARS Program has expanded to include a wider variety of subjects in STEM including conservation and marine biology and other natural sciences practiced in Hawaii. Since its inception, the STARS program has aimed to provide encouragement and inspiration to young women who are interested in STEM, but may lack the support, encouragement and mentorship to pursue their aspirations.

The program is also designed to expose participants to the many opportunities, resources and individuals working on Hawaii Island, and give them insight into what is possible for their future in STEM-related fields.

So far, the program appears to be achieving its goals. Student feedback from the latest program shows 100% of participants are more likely to pursue a career in STEM after attending STARS. That number is up 10% from 2018 when student survey showed 90% of participants said the program influenced their future education and career plans.

In addition to a wide variety of in-depth talks and tours, this year’s students got hands-on experience building smart robots and planting native plant species at the Pu’u Wa’a Wa’a forest reserve in West Hawaii. The students also formed groups to tackle different aspects of a human spaceflight mission to Mars as part of a week-long project to help them apply what they were learning.

In addition to new subject matter, the 2019 program was lengthened by an additional day. The expansion was made possible thanks to the generous support of many sponsors and partners involved in bringing STARS to fruition. This year the program was generously supported through funding from heavy equipment manufacturer Caterpillar, Inc. (which donated $10,000), and Hawaii Community Foundation’s Career Connected Learning Program (which awarded a $5,000 grant to the program).

“It is incredibly important that we inspire students and help them develop an interest in science and technology at a young age,” said Caterpillar Engineering Manager Anthony McNealy. “These young women are the innovators of the future.”