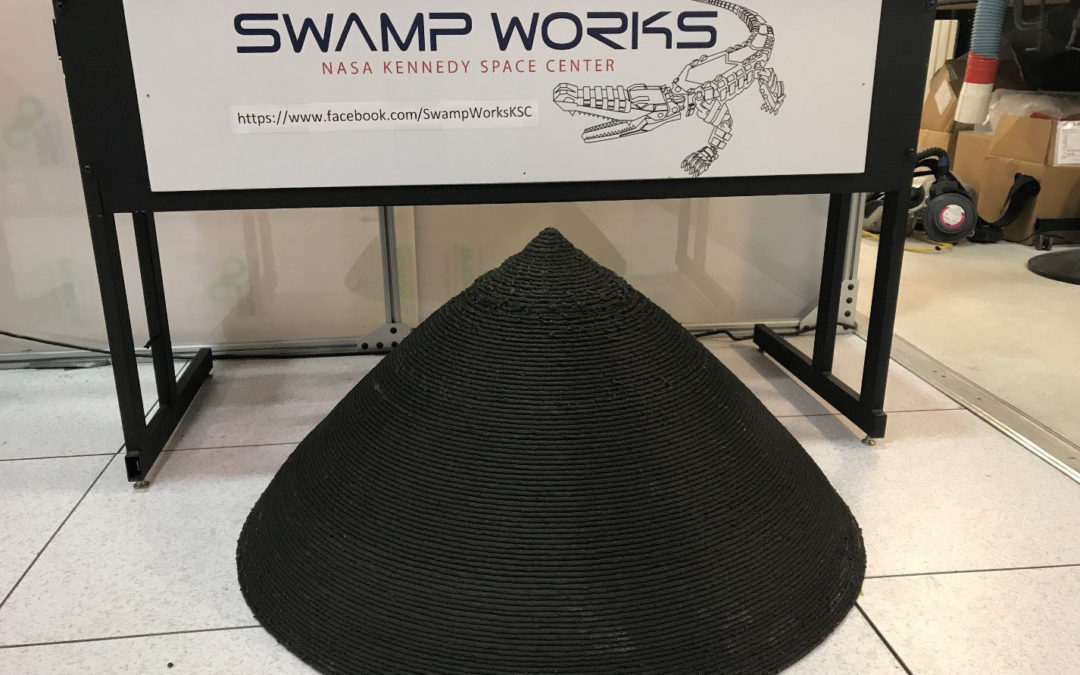 Above: A 3D printed ogive, or pointed arch, printed by a research team at NASA’s SwampWorks lab at Kennedy Space Center. Courtesy photo.

Shelter is a fundamental need for human and equipment operating in extreme environments. The environments of solar system bodies like the Moon, Mars and asteroids are harsh and unforgiving, requiring special measures beyond those typically required for extreme environments on Earth (i.e. the polar regions, barren deserts and high altitudes).  In space, factors like radiation, extreme temperature variations, micrometeorites, rocket plume blast effects during launch/landing, dust storms, Mars weather and topography are just a handful of the challenges that must be mitigated to ensure successful human and robotic operations.

Construction of structures to address these challenges (such as landing pads, blast protection berms, roads, dust free lots, shade walls/structures, hangars and habitats) will be necessary for a long term and sustainable presence in space—an effort that will ultimately lead to the expansion of human civilization into the solar system. Due to the extraordinary logistics and high cost of launching rockets and resources out of Earth’s gravity well, it will not be practical to bring the materials from home. However, if we take advantage of the vast amounts of indigenous resources already present on other planets and cosmic bodies,it will be possible to build the infrastructure needed for extreme environments while substantially reducing costs. Since solutions based on robotics and advanced materials are now in development, these indigenous construction materials can be collected and built with automation—and eventually even autonomy.  One example of the radically improved technologies now emerging is three-dimensional automated additive construction (3DAAC), also known as 3D printing with concrete, mortar and other basalt-based composite materials.

Our team at NASA’s Swamp Works lab at Kennedy Space Center (KSC) has designed, fabricated and tested a specialized robotic print head using a polymer concrete composite material.  The initial results of this research show it’s possible to 3D print infrastructure and shelters using a Polyethylene Terephthalate Glycol (PETG)/basalt glass fiber material in the form of pelletized feedstock. PETG is a material commonly used in plastic water bottles; basalt regolith is widely available on the Moon and Mars. Using at least 70% of materials available in space (and without any additional materials), the Swamp Works team printed a one-meter diameter ogive (see image above). The construction involved mounting the print head on a large industrial robot arm outfitted with a pneumatic feed system.  The maximum overhang angle of the ogive was 35 degrees from horizontal.  We’ve found that overhang angles, including printing horizontally (90 degrees), are possible with cooling fans and without any supporting materials.

Our continuing development work at the Swamp Works lab will enable printing of virtually any large structure with extreme overhangs and no supports. The KSC team is collaborating with PISCES to develop new basalt materials for applications in space exploration and construction to extend human civilization beyond Earth.

Rob Mueller is a senior technologist in the Exploration Research and Technology Programs Directorate at NASA’s Kennedy Space Center in Florida. He is the co-founder of the NASA Swamp Works innovation labs and the Kennedy Granular Mechanics & Regolith Operations Lab. He also leads KSC’s Autonomous-Robotic Systems involved with In-Situ Resource Utilization (ISRU).