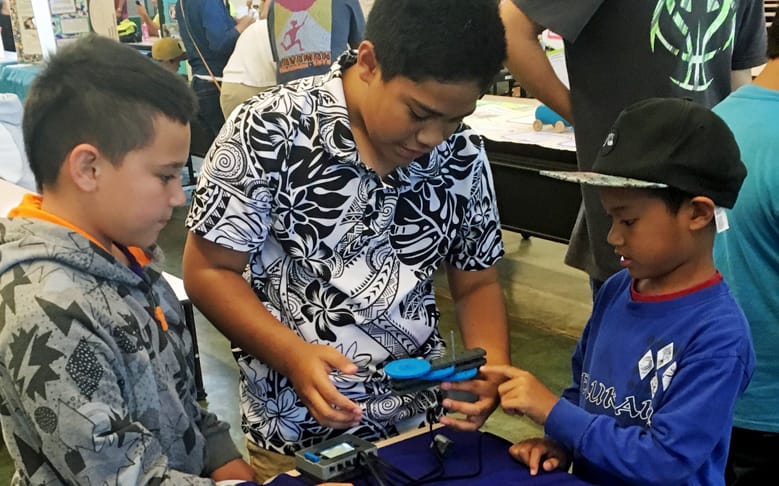 If there’s one thing that grabs the attention of kids these days, it’s robots. Case in point—last month members of the Keaukaha robotics club demonstrated three of their VexIQ robots to youngsters, inspiring a steady crowd of visitors during Keaukaha Elementary School’s ʻohana night on April 24. Their bots—which the club members built and programmed themselves with help from mentors—were a hit. Visitors learned how the competition-ready robots work, and how to drive them using a handheld remote.

The Keaukaha robotics club was first launched last November through a collaboration between PISCES, University of Hawaii at Hilo and RISE (Revealing Individual Strength for Excellence)—an extracurricular program designed for underserved Native Hawaiian children. The kids took to it with surprising enthusiasm. An initial team of half-a-dozen elementary students, mentored by Joel Paye of UH Hilo and Tayeh Madjeska of Hawaii Community College (both Hilo High School alumni), built and programmed their robots at surprising speed. In fact, they were nearly ready for competition within months—a goal that wasn’t planned for another year.

“So far, this program has been a huge success,” said PISCES Director Rodrigo Romo. “We expect this to be a long-term program to give Keaukaha youth new educational opportunities.”

Both the kids’ mentors and parents have commented that the students love the program and look forward to returning in August. The program is currently on summer break and will resume with plans to compete in the VexIQ league next year.