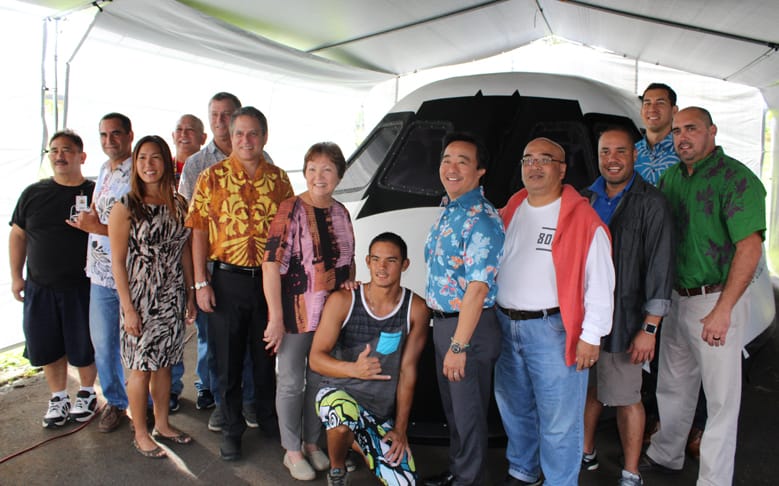 Lawmakers from the Hawaii State Senate Ways and Means (WAM) committee took a look inside an authentic replica of the Space Shuttle Challenger at Kea’au High School on Saturday morning, Oct. 28. The refurbished shuttle cockpit and flight simulator was a PISCES-facilitated project completed by students at Kea’au High School and the Civil Air Patrol.

Two teams of automotive and construction academy students refurbished the interior of the shuttle cockpit, reinforcing the structure and repainting the body while installing wiring and displays that enable a flight simulator.

Since a grand unveiling in January 2016, the shuttle replica has sat outdoors beneath a tarp awaiting a proper home. PISCES and school administrators sought support and help from lawmakers to overcome challenges associated with establishing a permanent structure for the simulator, which would serve as an educational tool for attending students.

The Challenger replica was originally housed by NASA in Florida. After finding out about its presence in Hawaii, former PISCES Director and NASA Shuttle Flight Director Rob Kelso took interest in acquiring the cockpit as a student project and educational tool. The unit is on long-term loan, courtesy of the Pearl Harbor Aviation Museum on Oahu.

Space Shuttle Challenger has a special place in the heart of Hawaii. The Aloha State’s first astronaut, Ellison S. Onizuka, was aboard the tragic Challenger flight that exploded seconds after launch in 1986, killing all crew members aboard. Onizuka’s legacy and memory as an accomplished pilot and astronaut continue to inspire youth through events like the annual Onizuka Day science fair hosted by the University of Hawaii at Hilo.