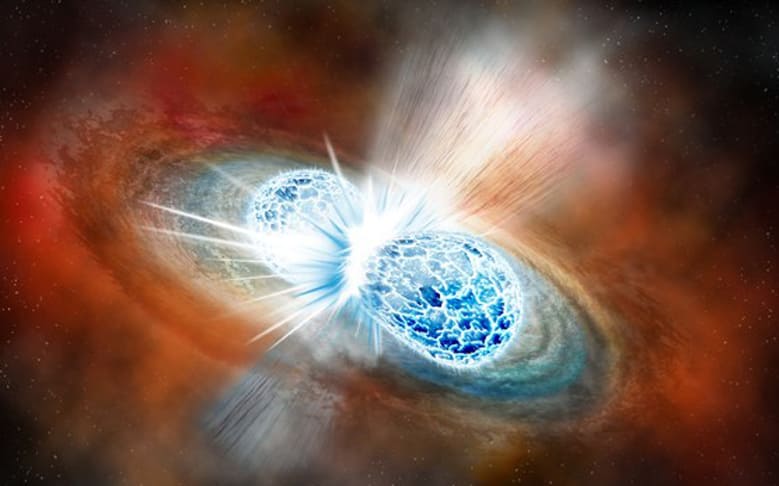 Artist rendering of a binary neutron star merger and resulting explosion. Created by Robin Dienel, courtesy of the Carnegie Institution for Science.

A team of University of Hawaiʻi (UH) astronomers played a major role in identifying the location of the first-ever binary neutron star merger observed by scientists. The landmark finding is being called “one of the most significant astronomical discoveries in decades” and alters our understanding of the origins of heavy elements found on Earth and in our own bodies.

The event began on Aug. 11, 2017, when two neutron stars—massive, dead stars that have expended their fuel and are incredibly dense—spiraling toward one another some 100 million light years away generated gravitational waves before colliding. Here on Earth, the Laser Interferometer Gravitational-Wave Observatory (LIGO) detected the waves, along with NASA’s Fermi Space Observatory. However, the location of the phenomena was not clear and the international astronomy community mobilized to help.

UH Mānoa Institute for Astronomy researcher Benjamin Shappee was among a small team of scientists at the Pan-STARRS survey facility on Haleakalā, Maui, that sprung to action. Together, the team confirmed the occurrence of the binary neutron star merger and resulting kilonova explosion after observing a faint burst of light in a distant galaxy. After confirmation, observatories around the world focused their sights on the phenomena, marking an unprecedented global effort not seen in the history of astronomy.

“Now there is a new blossoming field of study in astronomy,” said Shappee. “This will be the focus of hundreds of astronomers, from around the world, for months and years to come.”