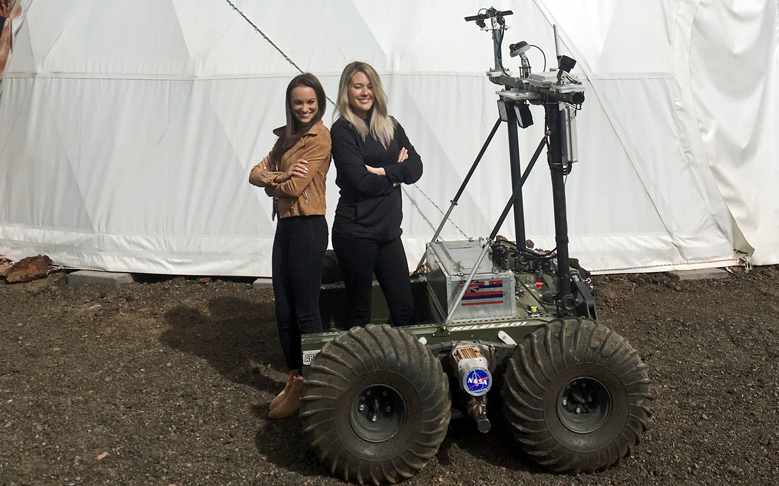 Hawaii’s continuing role in space exploration was highlighted in late September when a national contest brought an aspiring astronaut to the Big Island to train like a Martian astronaut.

With camera crews in tow, Julia and Emily piloted a mock Mars mission with the Helelani rover, spent a night on “Mars” at the HI-SEAS (Hawaii Space Exploration and Analog Simulation) habitat on Mauna Loa, and toured the Canada-France-Hawaii Telescope on Maunakea. The pair got a first-hand look at the exciting space-related projects happening in Hawaii as part of the third-annual contest, which focused on Mars this year.

“Mars is the next major frontier for crewed space exploration,” Xploration Outerspace Host Emily Calandrelli said in a press release for the contest. “By centering this year’s contest around such an ambitious mission, we hope to really inspire and encourage those young people who will actually make it happen!”

Julia was the first deaf contestant to win the contest. She was also the first individual to pilot Helelani at the HI-SEAS habitat. With Emily as co-pilot, Julia remotely drove Helelani from within the space dome, steering the 700-pound spacecraft over rugged lava and capturing image data of the surrounding terrain. PISCES Geology Technician Kyla Edison designed the mission to characterize the site’s local geology. PISCES intern Jack Andersen explained the controls and landscape hazards to Julia after configuring the rover’s software and hardware systems.

Later, Julia and Emily stayed overnight at HI-SEAS accompanied by two Mission V crew members, Laura Lark and Brian Ramos. Laura and Brian, who knew a bit of sign language themselves and could communicate directly with Julia, recently emerged from an eight-month mission living inside the habitat.

HI-SEAS functions as a test bed for a continuing NASA-funded social and psychological study conducted by the University of Hawaii at Mānoa. Researchers want to better understand the long-term effects of isolation on a group of humans in preparation for settlements on places like Mars, and how to make that ambitious effort a success. The next HI-SEAS mission is scheduled to begin in early 2018.

We at PISCES were honored to support Julia’s dreams of becoming one of the future humans to boldly explore the new frontiers of space. Congratulations Julia! We wish you the best in your continuing space adventures!