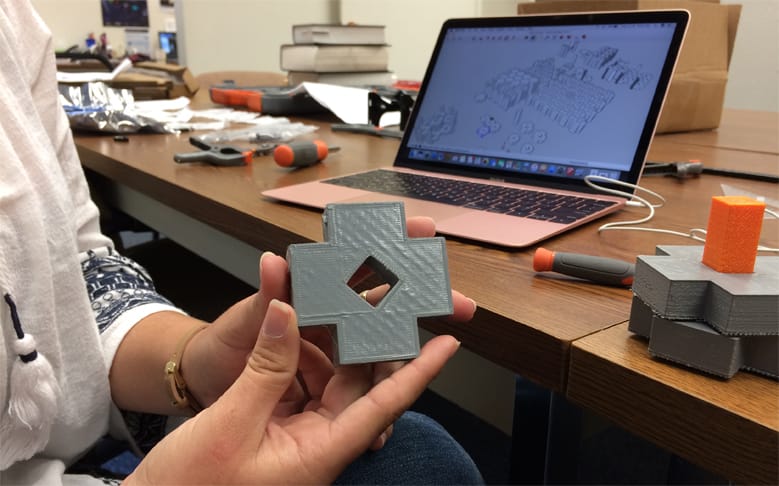 Photo: The new “LEGO” design improves upon its predecessor by reducing weak points and increasing versatility for various building applications.

PISCES Intern Lily Leyva has innovated a new design for “Planetary LEGO Blocks,” a NASA STTR-funded project in partnership with Honeybee Robotics, to enable ISRU construction in space and on Earth. The design improves upon its predecessor by increasing structural integrity and providing more versatility in building applications like horizontal and vertical construction, as well as incorporating rebar posts.

In 2016, PISCES developed a prototype design of these blocks during its robotically built vertical take-off/vertical landing pad project, creating pavers made of volcanic basalt shaped with interlocking corners and edges. After a rocket firing test, the pavers showed favorable results but still needed significant improvements in their structure and design. Many cracked under the intense pressure and heat of the rocket blast. During the sintering process, these pavers were also prone to cracking at their corners and joints. 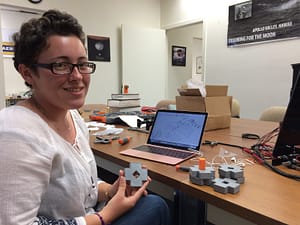 Lily decided the best solution to these issues would be to cut corners—but she didn’t have any shortcuts in mind. Instead, she proposed eliminating corners entirely from the block design, creating greater structural integrity while reducing the chances of cracking during test firing and sintering.

After drafting her design idea with a software program, Lily used a 3D printer to make the blocks and evaluate their look and feel while trying out various building configurations.

“So far this is the simplest and most complementary design for sintering and static fire tests,” she said.

Lily’s new design simplifies the sintering process by using only a single casting mold to create blocks that can be used in multiple applications. They can also be used to build in a range of applications, including horizontal and vertical structures.

Meanwhile, the rest of the Materials Science Team—Intern Kyla Defore and Operations Manager Christian Andersen—are assessing various procedures for casting and sintering basalt fines to perfect the process of creating these blocks. While heat remains the key ingredient in the process, the team is now focused on determining a specific temperature and duration, in addition to identifying the exact tools and materials needed to create a consistent product.