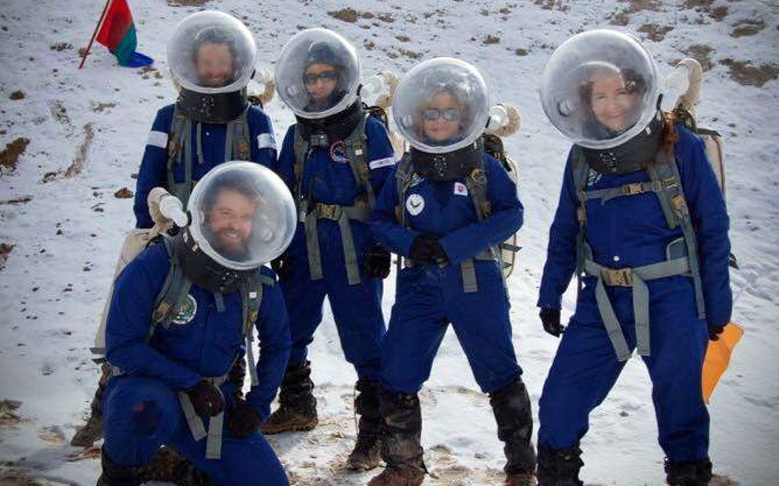 The team, known as Crew 173 or Team “PRIMA,” was selected by The Mars Society to conduct an off-world simulation at MDRS, a facility situated in a high desert neighboring Hanksville, Utah.

Their work included a 3D printing construction project through ISRU (In-Situ Resource Utilization) which successfully built a small structure of interlocking bricks at MDRS. IRSU will be a crucial technology in the future of human space exploration and colonization for building infrastructure and extracting valuable resources on other celestial bodies.

The team also conducted carbon sampling and testing in a mock-search for potential extraterrestrial lifeforms. Developing procedures and methodologies for sampling key minerals that are necessary to sustain life as we know it aims to answer the big question: are we alone in the universe?

In a temperature-controlled green habitat capable of simulating extreme conditions, Team PRIMA also grew food and measured the effects of the environment on nutritional values.

MDRS also provided an opportunity for students to participate in the mission. Students from both Israel and Slovakia developed experiments for Team PRIMA to conduct at the desert Mars-simulation facility. Slovakian students designed a project that successfully increased the growth speed and yield of spinach under Martian-like conditions. Members of Team PRIMA  had a taste of the successful harvest as part of their last meal at MDRS, harvesting spinach leaves to make a fresh salad.

MDRS also featured an art-outreach project aimed at stirring public interest in Mars and space exploration by sharing the step-by-step process of the mission. Every aspect of the simulation was documented via video and other media before, during and after completion. The outreach effort also focused on inspiring youth to pursue STEM education.

According to a post-mission report, the project ran smoothly owing to “great group dynamics” and a “multicultural atmosphere.” Members of Team PRIMA hailed from various parts of the world including Europe, Israel, Ireland and Australia, sharing “culture nights” and bonding around a shared goal to increase awareness of the importance of space research and exploration in their home countries.