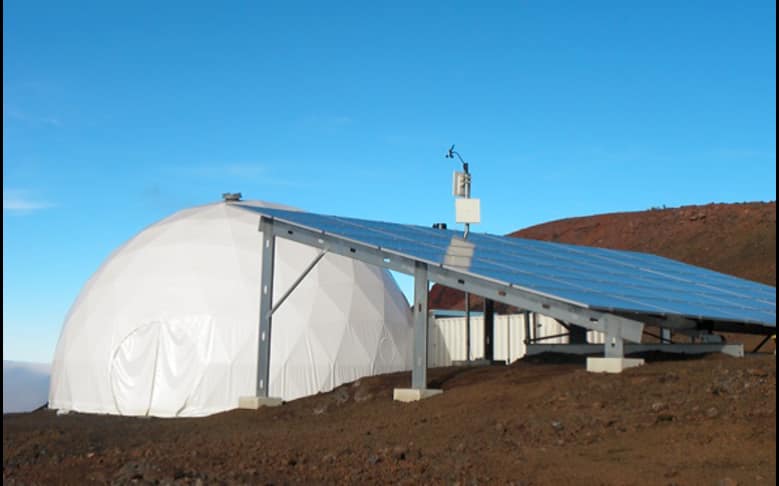 Image: For the next eight months, six scientists will live inside this 36-foot diameter dome  on the slopes of Mauna Loa to study the effects of isolated living in deep-space. Photo courtesy of HI-SEAS.

Six “Martian astronauts” just entered the HI-SEAS (Hawaii Space Exploration Analog and Simulation) Habitat, a vinyl-covered, 1200 square-foot dome nestled on the slopes of Hawaii’s Mauna Loa volcano on Thursday, Jan. 19 where they will live in total isolation for the next eight months.

The group of carefully selected scientists – four men and two women – is part of a NASA-funded study conducted by the University of Hawaii at Manoa to assess long-term psychological and social effects of isolation on people in preparation for long-duration missions in space. The participants include engineers, a computer scientist, a doctoral candidate and biomedical expert who were each selected from 700 applicants through a rigorous series of testing and interviews.

The eight-month study marks the fifth mission in a series that began in early 2013, with the longest stay lasting a year.

The objective of the 2017 mission will focus on identifying the best process for selecting a crew to execute a long-duration space mission and assessing the effects of varying levels of autonomy throughout their stay.

On a related note, HI-SEAS Principal Investigator Dr. Kim Binstead joined PISCES’ Board of Directors in late 2016 to support the development and advancement of technology, research and education in aerospace and space exploration throughout the State of Hawaii.