The Pacific International Space Center for Exploration Systems (PISCES) is partnering with the University of Hawaii at Hilo and NASA this month in a ground breaking research project to prepare for an eventual manned mission to Mars.

The project, called BASALT (Biologic Analog Science Associated with Lava Terrains), is focused on developing operation protocols for a joint human-robotic exploration of Mars in the search for extraterrestrial life. BASALT scientists and crew members are conducting simulated missions in two locations which closely resemble the Martian landscape at different eras: Mauna Ulu at Hawaii Volcanoes National Park and the Eastern Snake River Plain in Idaho.

Currently, the BASALT team is investigating Mauna Ulu by traversing the rugged lava terrain to collect rock samples for both biologic and geologic analysis. 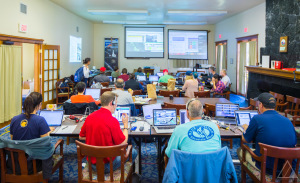 “We add a twist to our scientific fieldwork by conducting it under simulated Mars mission constraints,” said Dr. Darlene Lim, geobiologist and principal investigator for the BASALT research project. “By doing so, we can evaluate operational concepts and a variety of supporting capabilities that range from software to hardware components with respect to their anticipated value for the human exploration of Mars.”

One of their constraints is a communication time delay to simulate the latency of transmissions experienced between planets. Dr. Lim and her team are hoping to develop a tricorder-like device, as envisioned in Star Trek, to be able to identify rock samples using a hand-held instrument.

The researchers hope to better understand the habitability of Mars by studying Mauna Ulu, which is a high-fidelity analog for the landscape of early Mars when volcanism and water were common.

“No one has really worked this out yet,” said John Hamilton, PISCES test logistics and education/public outreach manager. “We want to work out the kinks during these exercises so we have it together on a real mission. By the time they go to Mars, they’ll have a rock-solid plan.”

The BASALT team consists of scientists, engineers, mission operators and active astronauts. Roughly a dozen students from the University of Hawaii at Hilo are also assisting with the project. Hamilton, who is also a faculty member with the University of Hawaii at Hilo Department of Physics and Astronomy, is serving on the BASALT Science Team, overseeing data collection, logistics, and student assignments. The research project is central to NASA’s Journey to Mars program.

“PISCES is honored to be working together with the University of Hawaii at Hilo and NASA Ames on this project,” said Rodrigo Romo, PISCES program manager. “Collaborative work with Ames has been in the frontline of applied research for PISCES recently. The fact that university students get the opportunity to participate in events like the BASALT project will help them meet the demands of a very competitive industry.”

PISCES was selected last year by NASA’s highly competitive PSTAR (Planetary Science and Technology Through Analog Research) program to participate in the four-year, $4.2 million BASALT project, which is being administered by the University of Hawaii at Hilo. The BASALT research team will be conducting their research on Hawaii Island until Nov. 18.