PISCES intern Teddy DeRego is seen here working on the communication system at the Mars analog site before the test on Wednesday.

PISCES External Relations and Strategy Specialist Rob Kelso served as Mission Director for the one-day mission. The objective of the mission was to demonstrate the command and control of the PISCES rover from their new control center and to successfully demonstrate a telerobotic geology mission of a simulated planetary site using remote operations. 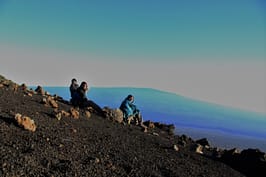 PISCES staff pauses on Mauna Kea before the robotic simulation test on Wednesday.

Kelso says the idea is to mimic a real-life lunar mission where first a rover would go to a place such as the Moon and scientists would remotely investigate its geology from Earth. He says PISCES’ ability to conduct the simulation will interest private companies investigating future lunar missions.

The endeavor started Wednesday after significant changes were made to the rover’s system this summer, including the addition of a stereoscopic imaging system (SIS) and an overhaul on the robot’s Graphic User Interfaces (GUI). PISCES interns and Hilo natives Aaron Roth and Ara Uhr assisted with the upgrades and test on Wednesday.

This was Hawai’i’s first lunar robotic simulation. Earlier this year PISCES conducted another lunar experiment with the robotic construction of a Vertical Take-Off/Vertical Landing pad.