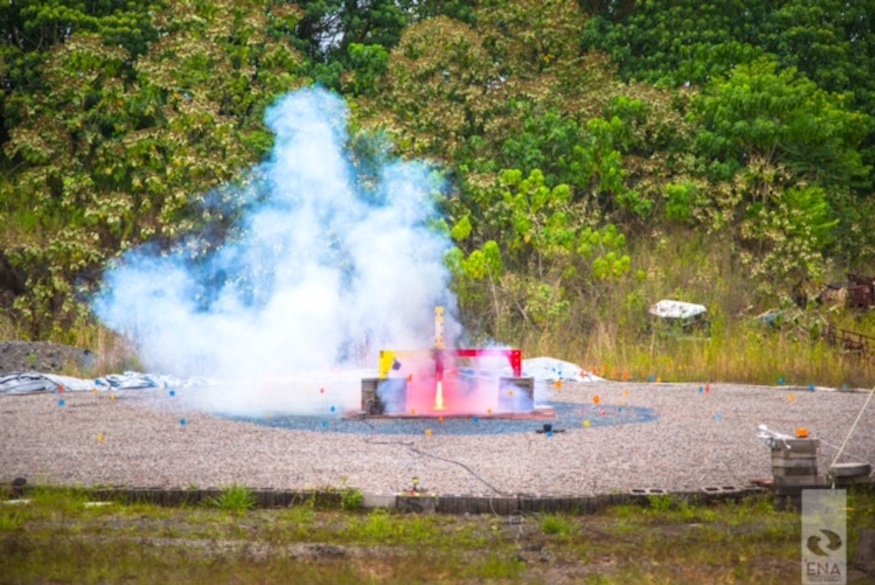 After months of preparation, the Pacific International Space Center for Exploration Systems (PISCES) finally tested the durability of their robotically-built lunar landing pad.

The test took place on the Big Island of Hawaii at 1 p.m. on Sunday, March 20. The test consisted of a four-second burn of a rocket engine whose power is equivalent to 26.5 lbs. of dynamite!

PISCES scientists, along with engineers from NASA and Honeybee Robotics, have been working together to construct Hawaii’s first robotically built Vertical Take-off/Vertical Landing pad using indigenous Hawaiian basalt material mined from a quarry near Hilo, Hawaii. The basalt found in Hawaii is nearly identical to that found on the Moon and Mars. The goal of the project is to test methods of construction for future space missions.

Landing pads, such as the one PISCES’ robotic rover Helelani built, offer a flat, stable surface to prevent damages that occur when spacecrafts take off or land on planetary objects.

On Sunday, the rocket engine “Astro the Rocket” successfully deployed onto the pad. Some of the pavers were impacted by the blast, which PISCES Executive Director Rob Kelso said wasn’t totally unexpected.

“We’re still looking at the data. It was an extremely valuable test that will help us evaluate the interlocking pavers and the interaction of a high thrust rocket engine on a lunar pad,” he said.

The next step for PISCES will be looking at the design of the interlocking pavers and the pad construction, and evaluating the data that will provide feedback into the next design phase.

This was the first test of the pad.

The project is part of PISCES’ Additive Construction for Mobile Emplacement project and is a partnership with NASA, Honeybee Robotics, ARGO, Hawaii County Department of Research and Development and the state of Hawaii. PISCES also partnered with Ena Media Hawaii for the rocket engine firing test.