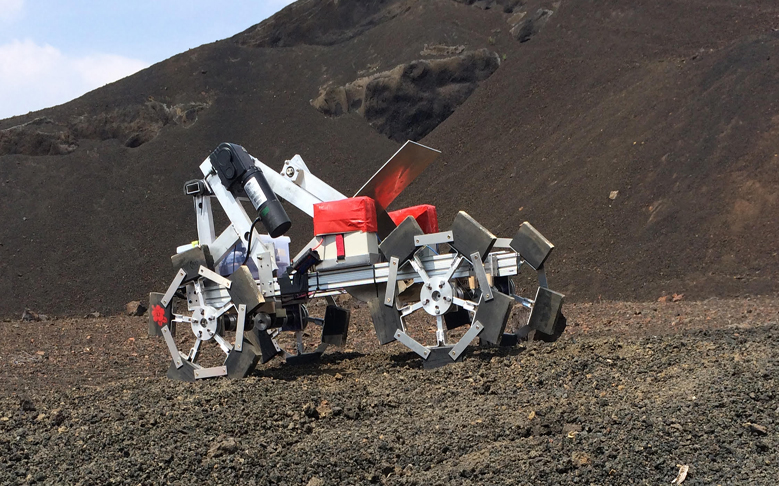 The University of Hawaii at Hilo’s Space Robotics Team has successfully built from scratch the school’s very first planetary mining rover.  And by competition standards, it’s a contender.

Ethan Paguirigan, Carli Hand, and Daryl Albano comprise the core team that designed and built the rover – appropriately named “Spock” after UH-Hilo’s mascot, “The Vulcans” – from scratch over the course of a semester.  They intended to enter NASA’s annual Robotic Mining Competition (RMC) at Kennedy Space Center, which challenges college teams to build a space-worthy mining rover that can effectively mine and haul regolith, or dirt.

Though they ran short on time, the students were able to test Spock’s prowess on July 28 for the very first time at a PISCES Martian-simulation site as part of the 2015 PRISM (PISCES Robotic International Space Mining) event.

“It went spectacular,” said Ethan Paguirigan, UH student and team leader of the robotics group who tackled the mechanical design of the rover.  “The entire system was untested… it was all a big mystery.”

Operating the robot remotely from Gemini Observatory Headquarters in Hilo some 30 miles away, students initially faced some challenges.  But any uncertainty about Spock’s capabilities were soon put to rest after the rover hauled 2.5 pounds of dirt and gravel, qualifying it by NASA competition standards as a contender.

Following their first successful field test, Ethan, Carli, and Daryl are looking at an ambitious upgrade for Spock – autonomous operation.  Their goal is to integrate sensors into the rover that will allow it to know where it is and what it is doing without a driver.  With this in mind, the team intends to enter Spock in NASA’s 2016 RMC – boldly going where no UH students have gone before.

Ethan, a mechanical engineering major, says he got into robots after seeing Marvel’s first installment of Ironman on the big screen.  Carli is double-majoring in math and electrical engineering; Daryl is the programming wiz behind Spock with his studies directed in computer science. 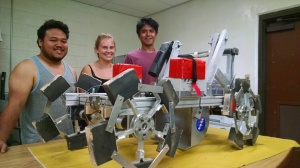 Spock’s simple design and unique features speak for its performance.  The battery-operated, 125-pound rover is about the size of a large lawn mower, but would eat any yard maintenance device alive with its rugged four-wheel-drive design.  Using “wegs,” or spoked “wheel legs” made of wooden pegs, the rover has superior traction and mobility on rugged, rocky surfaces.  The frame is made of light-weight aluminum and houses a cleanly-welded shovel to scoop dirt and gravel using an actuator from an electric wheel chair.

Besides innovating the design and build of a really cool robot, UH-Hilo’s space robotics team is also advancing the technology of ISRU – in-situ resource utilization.  ISRU involves “living off the land” by utilizing local materials like regolith for creating usable resources and infrastructure.  On other planets, this might look like space shelters, breathable oxygen, and rocket fuel.  All from dirt you ask?  Yes.  And it’s becoming more of a potential reality thanks to the hard work of scientists and students alike.