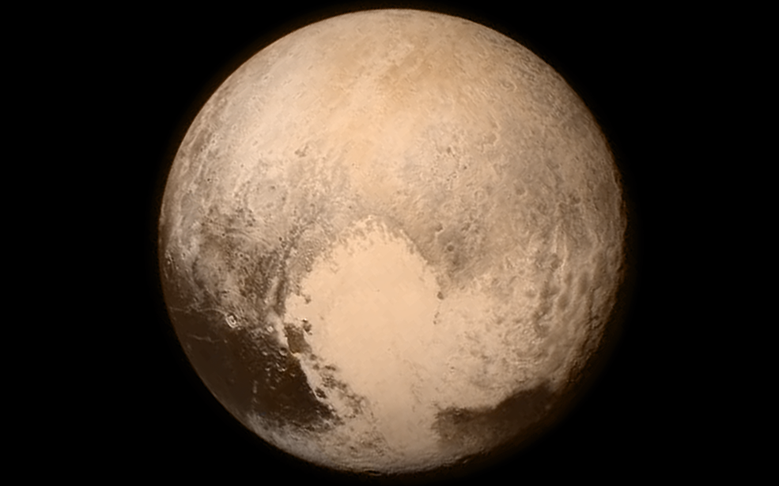 The latest image of Pluto captured on July 13, 2015 by New Horizons some 476,000 miles away reveals the dwarf planet’s “heart.” The photo took some 4.5 hours to transmit back to Earth 3 billion miles away, and is the most detailed image of the dwarf-planet captured to-date. Credits: NASA/APL/SwRI

“I have to tell you, the data that we are going to produce, in fact the data that we are already producing, is a gift for the ages, to all mankind,” commented Principal Investigator for the New Horizons mission, Alan Stern, during a NASA briefing on July 13. “Pluto has not disappointed.” 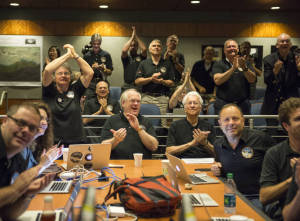 Scientists are eagerly awaiting to hear back from New Horizons, which is currently out of contact and fully focused on its mission objective: collecting detailed data and imagery on the Pluto system.  On schedule, the craft will “phone home” to mission control at the John Hopkins University Applied Physics Laboratory in Laurel, Maryland this evening at 9 p.m. EST.  The team expects the most detailed imagery yet of the Pluto system.

New Horizons has traveled 3 billion miles over the last 10 years to encounter Pluto and its moons, writing the textbook on the distant system for the first time.  The data it is gathering will take 16 months to completely transmit back to Earth.  Even so, scientists have already gleaned some exciting findings.

Stern announced the confirmation of an ice cap on the dwarf planet’s northern pole, as well as nitrogen escaping from its atmosphere.  Pluto turns out to be larger than previously expected at 1,473 mile in diameter, settling a decades-old debate.  High resolution imagery also revealed the presence of an endearing heart-shaped surface feature.

The far-flung mission was first conceived in 1989 when Stern posed the question at NASA Headquarters, “Why aren’t we starting a mission to Pluto?”  His question led to an inspired, determined effort to make the dream a reality. 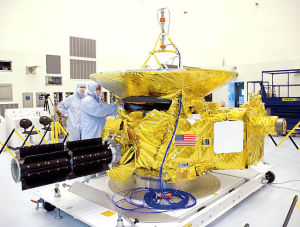 After overcoming sizable challenges, NASA officially approved the $700 million mission in November 2001, sending New Horizons to the launch pad for liftoff in January 2006.  The spacecraft became the fastest-moving man-made object ever sent into space after launch, covering the distance to the Moon in a tenth of the time it took the Apollo missions.

Even with 2.5 million pounds of rocket thrust aboard the U.S.A.’s largest rocket, Atlas 5, New Horizons still needed an extra boost to reach Pluto in a timely manner.  Through painstaking calculations, mission scientists used a fortuitous flyby of Jupiter to give the spacecraft a gravity-assisted boost, shortening travel time by a full three years.

New Horizons is now poised to answer some fundamental questions about the Pluto system: What does Pluto and its largest moon, Charon, look like?  What are they made of?  How do their atmospheres behave?

With seven of the most powerful instruments ever sent on a first fly-by to another planet (and all powered by less energy than a 60-watt light bulb), the spacecraft is well-prepared to answer these questions.

Though July 14 marks the culmination of the New Horizons mission at its closest approach, it also heralds a new chapter in planetary science.  After its historic pass, the spacecraft will continue its groundbreaking exploration by visiting other bodies in the Kuiper Belt – an outer region of icy objects ranging from boulders to Pluto-sized dwarf planets – and if all goes to plan, shed further light on the mysteries of our solar system.