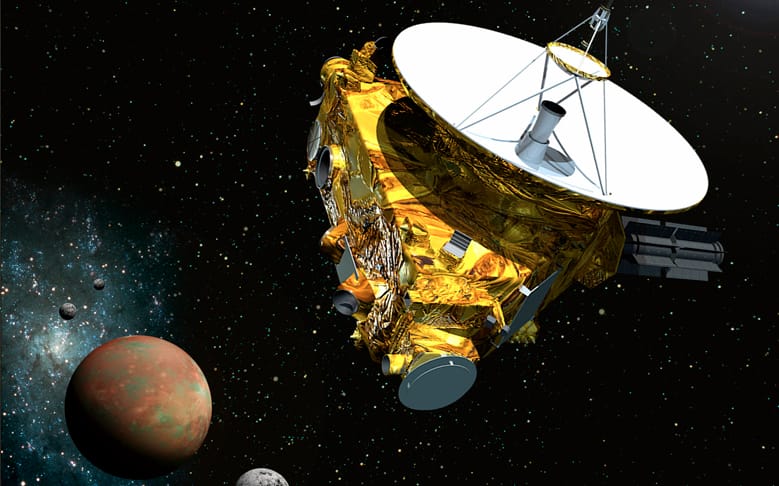 Less than a week remains until NASA’s New Horizons spacecraft encounters a historic flyby with the last of the “classic planets,” Pluto.  After a software glitch on July 4 that put the spacecraft into “safe mode” and hampered its scientific operations, scientists restored functions to normal without any significant impact to the mission’s objective.  The probe is now on track to make its closest approach on July 14, and will relay the first up-close imagery and scientific data from the distant dwarf planet.

At roughly the size and shape of a grand piano, New Horizons has careened through space over the last nine years to reach Pluto. Due to its speedy travel – thanks to a record-breaking launch velocity – there won’t be a chance to catch orbit around Pluto’s small body of gravity.  Instead, New Horizons will have to capture its data in a blazing flyby using seven on-board instruments.  But scientists don’t anticipate being disappointed.

Very little is known about the icy ball once thought to be a planet.  At a distance of about 5 billion kilometers from Earth, it’s not exactly an easy target to observe.  Scientists know it has five moons – four of which were only discovered after New Horizons was set for launch.  The largest, and previously known moon is called Charon.  It is theorized that these moons are remaining debris from a celestial collision, similar to Earth’s.

Although New Horizons will make contact this summer, the download time for the data it gathers is expected to take about 16 months.  With a 15-watt transmitter, the probe sends data at the speed of dial-up internet over a distance of some 3 billion miles.

NASA’s groundbreaking probe will also set the stage for deep-space observation over the next decade, as colossal telescopes in the works become operational and set their sights on the outer lying Kuiper Belt – a region beyond Pluto that is home to some 70,000 icey objects orbiting the Solar System.  The probe is also serving as a scout for these anticipated astronomical endeavors.