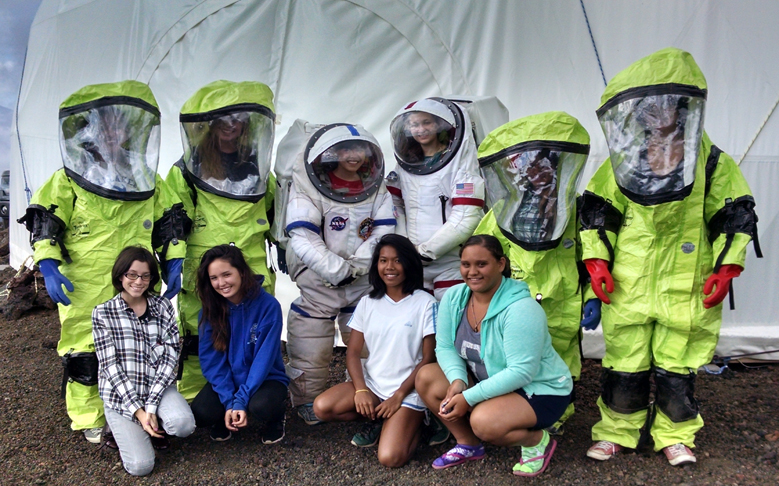 STARS students stand outside the HI-SEAS Mars-simulation habitat, suited up for a space expedition on the rugged terrain of Mauna Loa volcano in Hawaii.

Stargazing, spacecraft missions, and visiting Mars?  It sounds like the life of an astronaut, but this was the life of 10 Hawai‘i high school women who just completed the PISCES’ 2015 STARS (STem Aerospace Research Scholars) Workshop  on June 28.

The teenaged STARS spent five days immersed in the world of aerospace science with hands-on activities and presentations that proved to be both educational and fun.  Their activities included a mock robotic moon mission, a lesson in ISRU (in-situ resource utilization) – which could enable sustainable living on other planets – a test drive of PISCES’ Helelani planetary rover, and a visit to the lunar-like terrain of a planetary analogue test site. The students also convened for a night of stargazing on the slopes of Mauna Kea, and dined in at the astronomer lodging quarters of the Ellison S. Onizuka Center for International Astronomy.

Their space-centric adventure came to a close with an overnight stay on “Mars” courtesy of the HI-SEAS (Hawaii Space Exploration and Analogue Simulation) habitat on Mauna Loa.  The geodesic dome was recently home to six simulated astronauts who completed an eight-month mission in isolation in preparation for a potential Mars colony in the decades ahead.  Former HI-SEAS mission commander Martha Lenio hosted the STARS, who got a taste of off-planet life by trying on space suits, cooking “space” food, and hiking the rugged terrain of Mauna Loa.

STARS participant ‘Aulani Oka of Kamehameha School’s Kapalama campus said it was much more hands-on than she expected. “It’s been really fun,” she said.  “I really enjoyed stargazing.”

Another student, Ellie Furneisen of West Hawaii Exploration Academy (WHEA), who hopes to be an observatory operator one day, commented “You get to kind of experience hands-on, like, the industry of astronomy and aerospace and all that kind of stuff to see if it’s really something you’re interested in, and if you’re willing to pursue a career in it in the future.”

The 2015 STARS program is the second-annual workshop conducted by PISCES.  The program, led by Program Director Mari-Ela David Chock, aims to inspire young women in STEM (science, technology, engineering and math) by demonstrating how a career in aerospace is not a farfetched science-fiction dream, but an achievable, fun, and engaging reality within reach.

See the full line-up of photos from the STARS adventure.