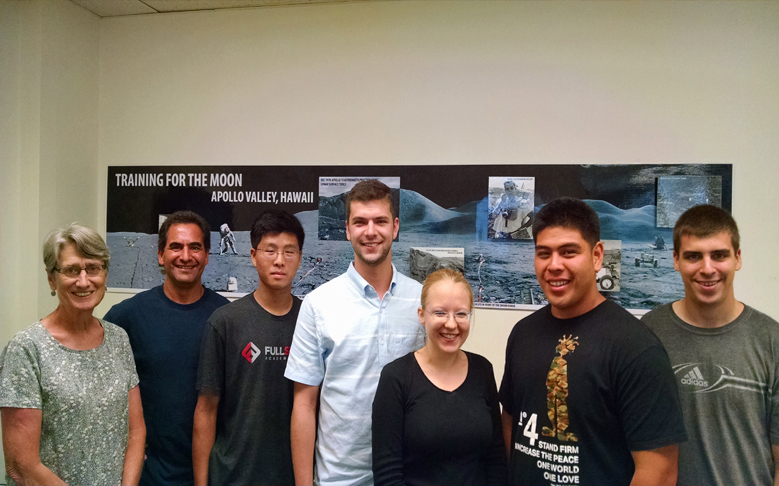 PISCES is pleased to welcome its 2015 Summer interns and volunteers to the Center’s `ohana.  This year, six bright college students have joined the ranks to participating in some exciting space projects, and apply and develop what they’ve been learning in the classroom.

Ernesto is a hands-on, problem solving kind of guy and is pursuing a career in Mechanical Engineering.  He is currently in his fourth year at the University of Hawaii at Manoa’s Mechanical Engineering program.  Ernesto says he grew up farming in Pahoa on Hawaii Island which gave him character and pushed him to work hard.

Karlin comes to PISCES from Cooper Union in New York City.  The New Jersey freshman is also studying Mechanical Engineering, and has a strong interest in robotics.  He wants to make a beneficial impact on society through his work, and has eight years of international robotics competitions under his belt.

Colin, who interned with PISCES last summer, is now a junior Geology major at the University of Hawaii at Hilo.  He says he finds working with PISCES “interesting and fun,” and is most excited about getting out into the field.  The Seattle native is known for his avid love of coffee, often seen around PISCES headquarters with a mug-in-hand.

Valerie is also a UH Hilo student studying Geology, and hails from Switzerland.  She is interested in learning more about Hawaii Island’s geology, and getting experience with others in her field.  She plans to get a Master’s degree following her undergraduate studies.

Eric comes to PISCES from Ontario Canada, and studies Physics and Political Science at the University of Guelph.  In addition to working with the PISCES planetary analogue site survey team, Eric will also be assisting with public outreach during the STARS workshop and PRISM competition over the summer.  In his free time, Eric enjoys volleyball and dance, and volunteering to help others.

Welcome to the PISCES team everyone!!