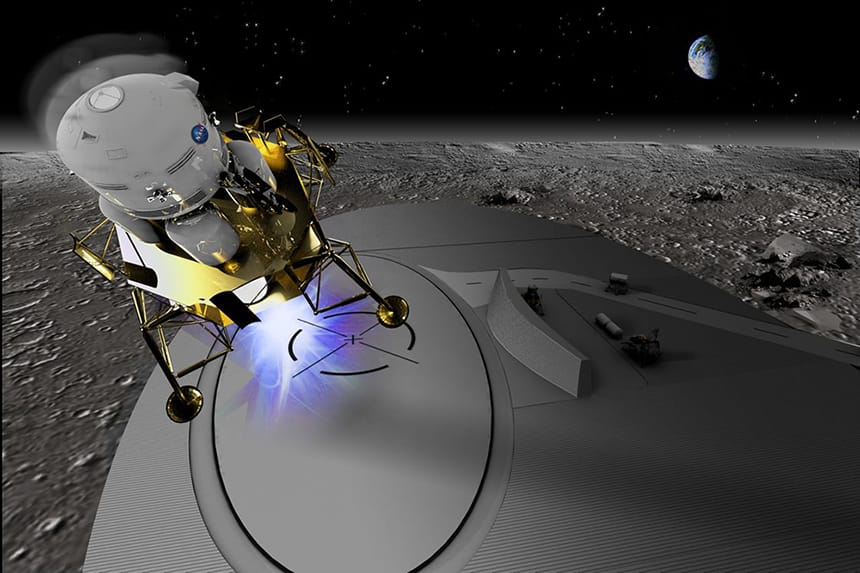 Above: Artist rendering by Behnaz Farahi and Connor Wingfield.

PISCES is launching a new space construction project that could bring the dream of space settlement a step closer to reality.

The project, called ACME (Additive Construction for Mobile Emplacement), is a joint initiative with NASA Kennedy Space Center’s SwampWorks, and aims to robotically build a lunar landing pad using volcanic basalt on Hawaii Island.  The goal is to successfully build a landing pad on Earth using local materials, so that it can be done in space.

To construct the pad, PISCES and SwampWorks will be utilizing ISRU, or in-situ resource utilization, sourcing volcanic basalt as a building material.  Basalt is nearly identical to the regolith (dirt) found on the Moon and Mars, and developing a method to use it effectively for construction on Earth could be applied in space.

PISCES and Swampworks are now in the process of designing and manufacturing pavers made of volcanic basalt to form the 9-square meter landing pad.  Surrounding the pad will be a 225-square meter perimeter of stabilized basalt to provide additional dust mitigation.

Landing pads will be a crucial component in future space colonies.  Spacecrafts can cause high velocity dust storms during take-off and landing, blasting planetary dust in all directions.  These jet-propelled sandblasts could cause significant damage to neighboring structures and space equipment.  To mitigate this problem, landing pads offer a flat, stable surface to prevent such damages.

The ACME project employs several of PISCES’ core objectives, including the Helelani planetary rover, advanced manufacturing, and a planetary analog testing site.  The Helelani rover will robotically prepare and perform the construction, and is currently being outfitted with tools and programming that will allow it to grade, level, and compact the landing pad site.  In addition, ACME will employ basalt sintering technology to grout the basalt pavers and stabilize the peripheral area.

Initial testing for the project is scheduled to begin this summer, with construction slated for the fall.

The basalt-based landing pad will be built in the Puna area of Hawaii Island, and be the first of its kind in the state.