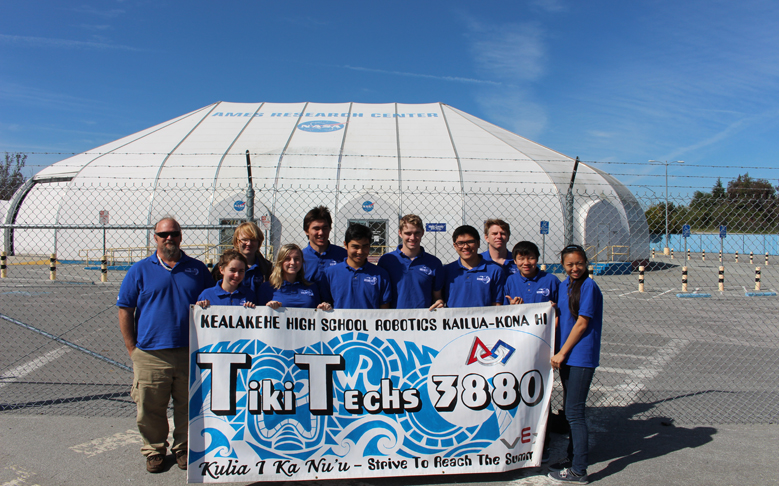 Image: PISCES Moon RIDERS students from Kealakehe High School got a tour of the NASA Ames Research Center during their three-day visit.

SSERVI, or Solar System Exploration Research Virtual Institute, which is headquartered at Ames, hosted the Moon RIDERS’ test in a lunar regolith simulant test bed during their visit from March 30 – April 1.  The 16 square-meter test bed room is filled with eight tons of JSC1A lunar dust simulant, and provided the students with the perfect opportunity to test their NASA-built electrodynamic dust shield (EDS) in lunar-like conditions.

Students also gave two technical briefings to SSERVI scientists about their initial test results following field work conducted with the EDS on the slopes of Hawai‘i’s Mauna Kea volcano in mid-March.  Their presentations also provided an in-depth look at Hawai‘i’s viability as a spaceport, and the potential of lunar resources to serve in furthering space exploration and colonization.

Data collected during the additional testing at NASA Ames will help determine the best placement for the dust shield and accompanying cameras aboard a spacecraft for experimentation on the surface of the Moon, anticipated in late 2016.  Their findings, including the tests conducted at Ames, will be compiled in a report to NASA and teams from the Google Lunar XPRIZE at the end of May.