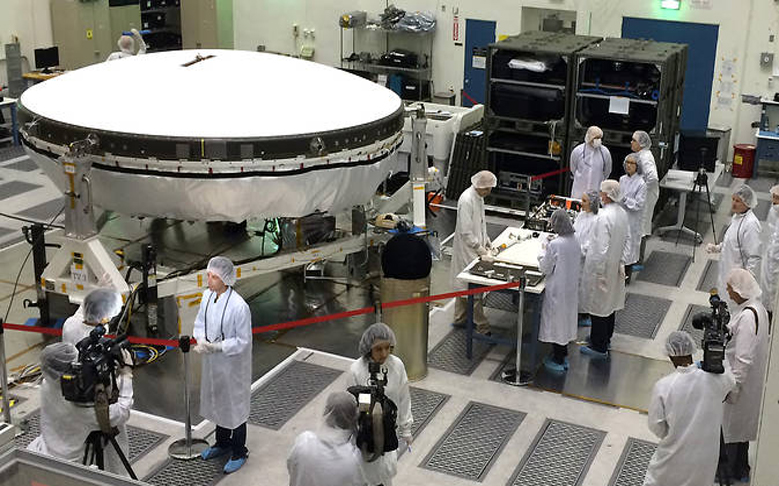 Above: Press members get an up-close look at the LDSD flight-test vehicle that will be tested on Kauai Island at NASA-JPL on March 31. Photo:  NASA/JPL-Caltech.

How did NASA land a 2,000 pound, car-sized robotic rover on the surface of Mars?  Part of their success lay in using a gigantic, 51-foot parachute to slow-down the rover after entering the Red Planet’s atmosphere.

NASA is now further developing chute technology to land even larger robotic crafts on other planets using even larger parachutes.  In mid-April, the agency is shipping its Low-Density, Supersonic Decelerator (LDSD), a saucer-shaped, rocket-powered test vehicle to the island of Kauai in the Hawaiian Islands to test its largest parachute yet.  The 7,000 pound flying saucer is designed to conduct full-scale stratospheric tests to evaluate next-generation drag devices.

During the testing slated for June, the LDSD will be carried to an altitude of 120,000 feet by a balloon, then engage its rocket booster, soaring to 180,000 feet.  Two drag technologies will be tested in an automated sequence:  the first is a doughnut-shaped inflatable tube designed to slow its supersonic travel from Mach 4 to Mach 2.5; the second is the largest supersonic parachute ever deployed.  Following the massive chute’s release, the craft is expected to splash down in the Pacific for retrieval.

The concept of using atmospheric drag as a way to slow down supersonic spacecrafts upon atmospheric entry is intended to spare valuable rocket fuel for final maneuvers, allow for larger payloads, and to enable landings at higher altitude locations.

The LDSD’s findings will test these technologies’ usefulness for future missions to the Red Planet, and others.  The mission is being led by NASA’s Jet Propulsion Laboratory in Pasadena, California.