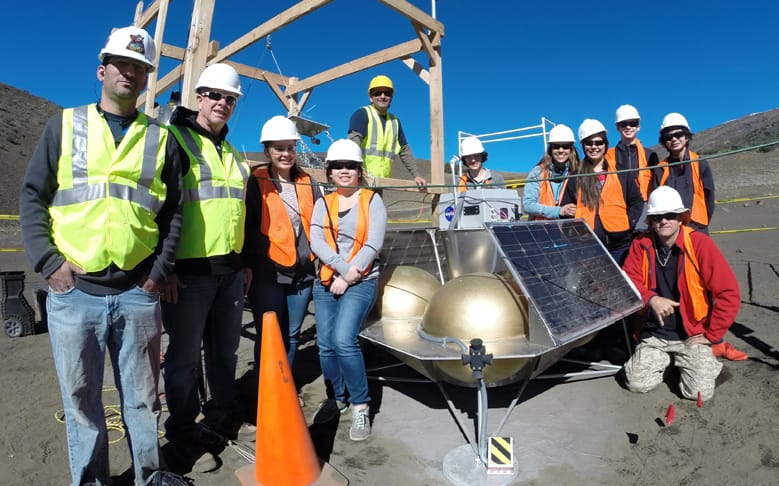 After two days of intensive work with their mockup lunar lander on the lower slopes of Mauna Kea volcano, `Iolani School’s team of PISCES Moon RIDERS have completed their first round of testing for their Moonbound space experiment.

Seven students and their instructor, Gilson Killhour, endured lengthy hours with the PISCES staff in the thin air and rugged, lunar-like terrain of a planetary analogue test site evaluating the experimental dust shield technology built by NASA, which is the heart of the experiment.

The team’s goal was to see how the electrodynamic dust shield (EDS) performed under varying conditions aboard their mockup lunar lander.

“We’ve had a couple hiccups along the way in the beginning, it was really tedious. But we’ve got so much work done, and I think that was just amazing that we were able to pull together and find our groove,” said `Iolani Moon RIDERS Co-President, Veronica Shei.

A high-pressure gas system blasted surface dirt beneath the lunar lander skyward, simulating a booster thrust and getting the space craft sufficiently dirty to test the dust shield.  The EDS was tested at multiple angles, lighting exposures, heights, and rotations to determine the best position to for it aboard the lander.

“It’s really a unique opportunity to go through all of the steps of really, a significant research project… I like being able to be here at an official testing site working with actual engineers and being able to test and do a lot of the work myself.  It’s pretty great,” said `Iolani student Aidan Swope, who worked on fabricating the mockup Astrobotics lander, programming, and data collection during the tests.

The students logged a wealth of data imagery and will use this information to determine the best angle for mounting the EDS, observing its effectiveness against varying textures of dust.  Though the dust shield’s performance in the field tests differed from laboratory results, the team now has the opportunity to take what they’ve learned and apply it towards improving the experiment’s configuration.

The next round of tests for the `Iolani Moon RIDERS is scheduled for October this year.