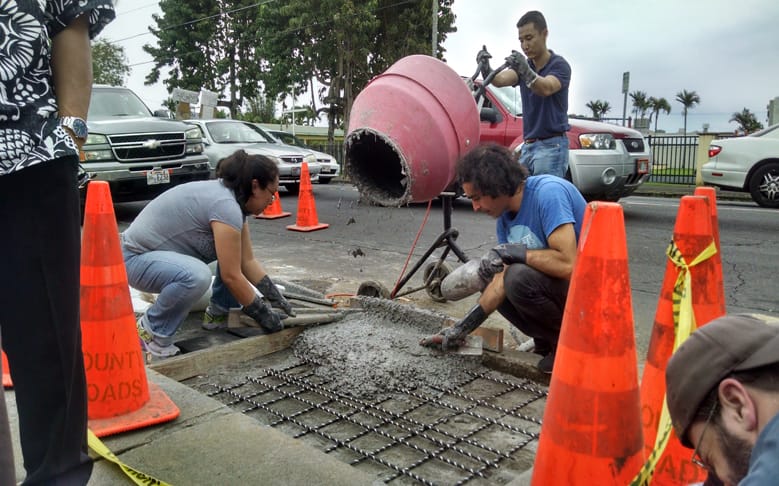 Image: Professor Lin Shen (standing) and civil engineering students from the University of Hawaii at Manoa pour the final section of concrete for the experimental lunar sidewalk in downtown Hilo.  PISCES photo.

Today (March 12), the Pacific International Space Center for Explorations Systems initiated the first step in its lunar concrete project.  You can literally walk on it.

Working in collaboration with the Hawaii County Department of Research and Development, the University of Hawaii at Manoa, NASA, and Kodiak FRP Rebar, PISCES installed a ‘lunar sidewalk’ near Lincoln Park in downtown Hilo on Hawaii Island.

The sidewalk is made of volcanic basalt instead of traditional concrete, and consists of three different slabs with varying binding agents which will be evaluated by researchers over the course of one year to test their efficacy.

Why is it lunar?  Basalt is extremely similar to the regolith (dirt) found on places like the Moon, Mars, and asteroids.  Part of the project’s goal is to develop a successful technique to utilize off-planet resources as building materials for future bases and colonies.

Each of the three sidewalk slabs use different binding agents for testing: fly ash basalt paver, baked basalt paver, and a fly ash binder reinforced with Kodiak FRP rebar composed of basalt.  The volcanic-based rebar is stronger and lighter than its steel counterpart, as well as corrosion resistant.

The lunar sidewalk experiment has two significant benefits for Hawaii and space exploration.  Learning to use the volcanic basalt fines – which are a waste product of Hawaii quarries – as an alternative building material could make the Islands more sustainable by sparing the costly environmental and economic effort of importing over 300,000 metric tons of Portland cement each year.  For outer space, basalt-based concrete could enable the utilization of resources found on-site on other planets or celestial bodies, sparing the costly effort of transporting them from Earth.