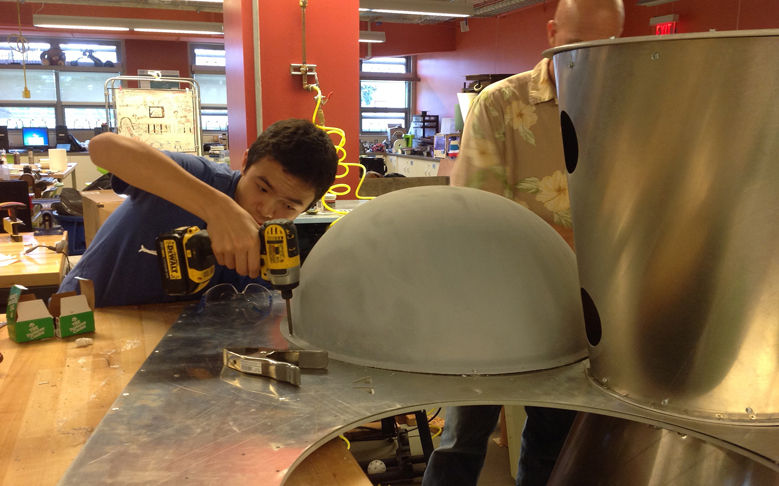 A PISCES Moon RIDERS student from `Iolani school working on a mock-up lunar lander that will be used in the first round of testing for the student lunar flight experiment.  Image: `Iolani School.

The first big milestone in assessing the PISCES Moon RIDERS student lunar flight experiment’s readiness for space is coming up on Mar. 16.  Students from `Iolani and Kealakehe High School will join on Hawaii’s Mauna Kea volcano at a PISCES planetary analogue test site to execute the first round of testing over several days.  The tests will assess the best location on a spacecraft for the key system in the experiment – the NASA-built electrodynamic dust shield (EDS).

Students have been hard at work on the project since August last year, and have constructed mock-up lunar landers based on designs created by two Google Lunar XPRIZE teams.  The landers have been outfitted with the EDS and will be tested in a simulated lunar landing situation using a come along pulley system.  The pulley will enable students to lower the landers towards the ground, simulating a real lunar landing, while a high-velocity gas pressure system mimicking rocket boosters kicks up a dust plume around the crafts.  The students will fire up the EDS module after the cloud settles to assess how well it removes dust from the landers.

Students will lift, blast, and descend the landers multiple times through changing variables to see how the EDS responds to different situations.  One test run will involve pouring much finer dust than what is found at the test site to see how well the EDS repels dust of varying textures.

The Moon RIDERS lunar flight experiment is a PISCES-organized STEM initiative to engage students to develop, test, and fly a real-life space experiment to the surface of the Moon by late 2016.  Working with PISCES, NASA, and Google Lunar XPRIZE teams, the two high school teams are slated to become the first students to put an experiment on the lunar surface.

The video below shows NASA’s test flight of is Morpheus Lunar Lander.  Moon RIDERS students will be simulating a landing in like-fashion, lowering their mock-up spacecrafts using a pulley and blasting dust into the air with a high-pressure gas system.  See the dust plume created by the lander at 1:34.  The simulated landing will enable students to test how well the electrodynamic dust shield works at repelling dust from the space craft.