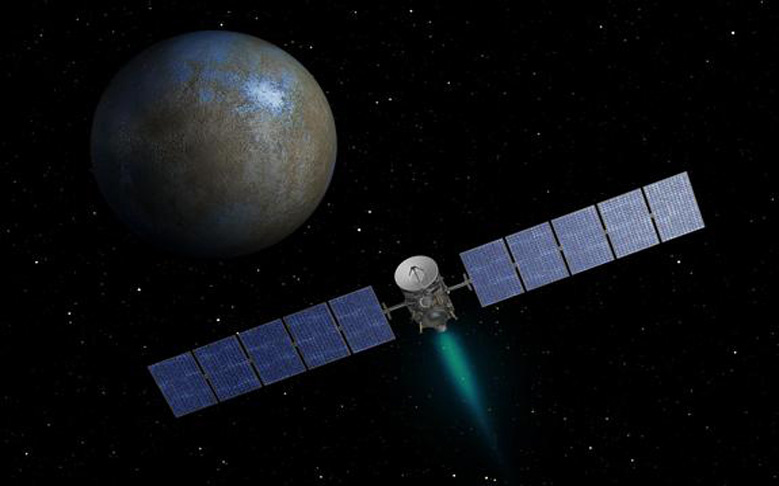 NASA’s Dawn spacecraft is slated to become the first probe to rendezvous with a dwarf planet Thursday evening (Mar. 5) in the main asteroid belt located between Mars and Jupiter.  The probe’s target, Ceres, is a 590 mile-wide (950 km) icey ball about the size of Texas.

Dawn recently made a visit with Vesta – one of the solar system’s largest asteroids – for a 14-month observation that began in mid-2011.  The probe has since been steadily catching up to its new target over the last 2 ½ years, journeying a total of 3 billion miles.

The rendezvous isn’t expected to be a suspense-ridden, nail-biting moment as in many historic spaceflights.  Instead, Dawn is gradually creeping up on Ceres until the dwarf planet’s gravity gently brings it into orbit.  However, should the probe successfully complete its mission, it will be the first craft in space history to orbit two separate extraterrestrial bodies.

“We’ve been using the ion propulsion system for a long time gradually to reshape Dawn’s orbit around the sun so that it matches Ceres’ orbit,” said Dawn Mission Director and Chief Engineer Marc Rayman, who works out of NASA’s Jet Propulsion Laboratory in Pasadena, California.

Launched from Earth in 2007, the $466 million Dawn mission was designed to study the two celestial bodies, Vesta and Ceres, to glean a better understanding of how planets form and the conditions that characterized our solar system in its infancy.

Dawn will spend a little over year observing Ceres, a little-known celestial object first discovered by an Italian astronomer in 1801.  The dwarf planet is believed to hold a great deal of water in the form of subsurface ice.  Scientists think it could also harbor lakes or oceans of liquid water giving rise to the possibility of extraterrestrial life.  Although Dawn is not equipped to search for life, it will give the first up-close look at Ceres, and hopefully shed further light on our mysterious universe.