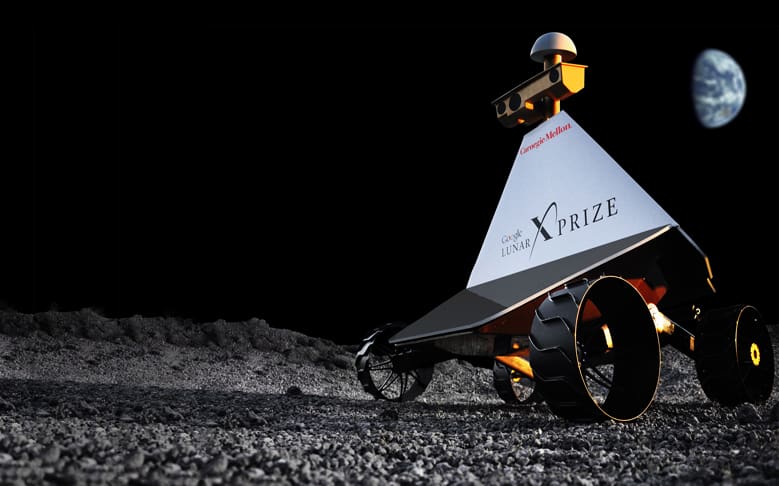 Above: Artist rendering of Astrobotic’s lunar rover on the lunar surface.  Credit: Astrobotic.

Two GLXP teams are teaming up to reach the lunar surface together aboard a rocket which could result in a sort of lunar NASCAR race to claim the grand prize in the Google Lunar XPRIZE competition.

U.S.-based team Astrobotic and Japanese team Hakuto have partnered to fly aboard a SpaceX Falcon 9 rocket in the global competition to win $20 million.  The grand prize will be awarded to the first team to land a robotic spacecraft on the Moon and traverse 500 meters across its surface while beaming back images and video to Earth.

“We will be flying with Hakuto to the surface of the moon,” said Astrobotic CEO John Thornton during a news conference on Feb. 23. “When we get to the surface, we will deploy our rover and deploy Hakuto’s rover, and then, together, we will drive off as fast as possible to win the Google X Prize.  It’ll be a full-on race once we get there.”

The two teams will share the cost of the flight, and are currently discussing the addition of other teams to the mission launch.  According to Thornton, the SpaceX rocket could accommodate almost every participating GLXP spacecraft for a trip to the Moon if other teams decide to join on.  More participants would mean a more competitive push following lunar touchdown, when teams would charge off on a space race across the Moon’s surface to claim the grand prize.

“We envision a ‘NASCAR on the moon’ scenario, where competing teams land together, and countries can cheer on their team to the finish line,” Thornton said in a statement. “Hakuto is the first team signed to fulfill our dream of the first race beyond Earth’s orbit.”

The potential space race could be televised with competing rovers beaming back live images of their progress to Earth.  Astrobotic and Hakuto have agreed to share the prize money if one of them claims the prize following flight aboard the Falcon 9.

Andrew Barton, director of technical operation at GLXP, commented on the partnership in a statement: “We are delighted that two of our teams have engaged in this partnership for their Google Lunar X Prize missions.  Stimulating new business ecosystems is one of the core goals of any X Prize competition, and this joint venture is an excellent example of how humanity’s commercial and economic interests will expand into space in the coming years.”