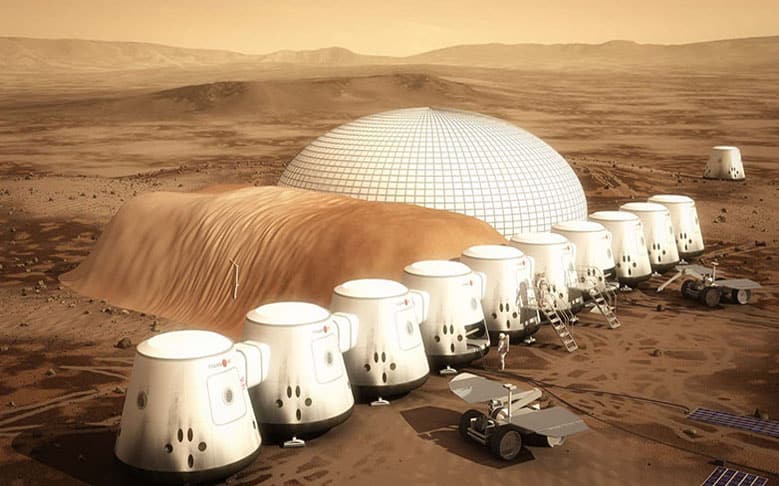 Above: Artist rendering of a future Mars colony.  Courtesy of Bryan Versteeg, Mars One.

After receiving over 202,000 applications from candidates all over the world, the Netherlands-based Mars One nonprofit announced that it has narrowed down its selection to 100 potential astronauts to become the first humans to colonize Mars.

Mars One plans to send four people to the Red Planet in 2025 on a one-way trip to pioneer the first human settlement on another planet.  The organization will follow the groundbreaking Martian mission with a new four-person crew every two years.

Twenty-four astronauts will be selected to prepare for the 2025 mission and work for the organization full-time.  The selection process began in April 2013, and the remaining pool of candidates has been narrowed down to 50 men and 50 women, ages 19 to 60. Thirty-nine hail from the Americas (33 from the U.S.), 31 are from Europe, 16 from Asia, and seven each come from Africa and Australia.

“The large cut in candidates is an important step towards finding out who has the right stuff to go to Mars,” Mars One co-founder and CEO Bas Lansdorp said in a statement. “These aspiring Martians provide the world with a glimpse into who the modern day explorers will be.”

The mixed group of potential Martian inhabitants must now face a series of challenges to determine their ability and willingness to withstand the rigors of a life on Mars.  Another round of cuts will divide the finalists into four-person teams who will undergo training in a simulated red planet outpost.

A precursory mission is in the works to send robotic landers and orbiters to Mars, beginning in 2018.