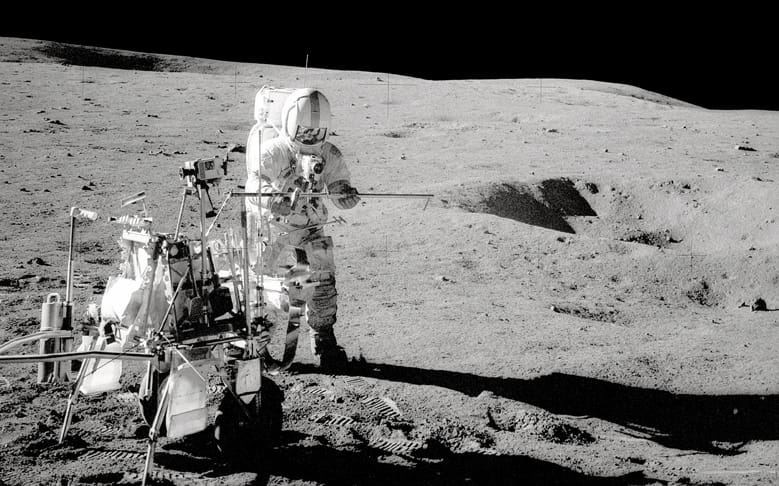 Image: Commander Shepard stands some 240,000 miles from Earth on the lunar surface next to the Modular Equipment Transporter (MET) – a lunar rover designed to carry tools, cameras, and sample cases around the lunar surface.  Credit: NASA. 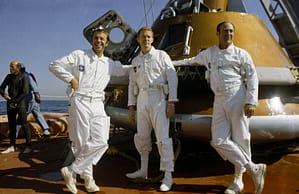 The crew of Apollo 14 shown during a water survival training in Oct., 1971. (L-R) Shepard, Roosa, and Mitchell. Credit: NASA

The pair set out to conduct a series of surface experiments during their 33-hour stay, setting the record for the longest EVA on the lunar surface at 9 hours and 24 minutes!  Shepard also set a new distance record on the Moon travelling roughly 9,000 feet.  The astronauts conducted surface experiments and collected nearly 100 pounds of Moon rock that were brought back to Earth for further study.

Shepard famously hit two golf-balls while on the Moon with a makeshift club he brought along from Earth. He had smuggled a six iron golf club head which he attached to the handle of a lunar excavation tool to make his swing.  He took several one-handed swings, limited by the range of motion in his space suit, and cheerfully declared that the second ball had gone “miles and miles and miles” in the low gravity of the Moon.  He later estimated the distance to be 200-400 yards.

Roosa remained in orbit aboard the Kitty Hawk Command Module where he photographed the Moon and conducted additional scientific experiments.  He also brought several hundred seeds aboard the craft, many of which sprouted resulting in what were later called “Moon trees”. The novel plants were distributed around the world in commemoration of the Apollo 14 flight.

The crew successfully completed their mission and returned to Earth, splashing down in the South Pacific Ocean near American Samoa on Feb. 9, 1971.  They were recovered by a U.S. Navy ship and later flown to Honolulu, Hawaii.  The Apollo 14 crew were the last astronauts to be quarantined after returning to Earth from the Moon.

Looking back at the lunar module across the desolation of Fra Mauro. This photo was captured during one of Mitchell and Shepard’s moonwalks. Credit: NASA.