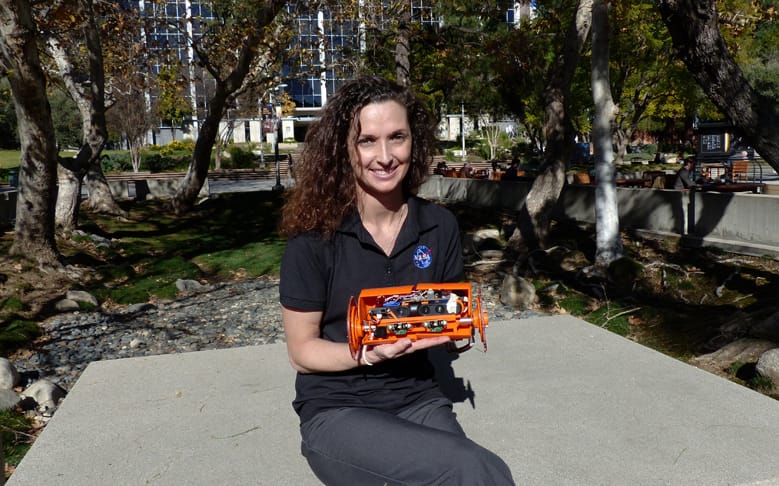 Image: ‘VolcanoBot 2’, held by its creator, Carolyn Parcheta, a postdoctoral fellow at NASA’s Jet Propulsion Laboratory in Pasadena, California.  The bot is preparing for a journey into the depths of fissures in Hawaii’s Kilauea volcano.  Credit: NASA/JPL.

NASA is preparing to test a new robot on Hawaii Island that could enable future off-planet explorations in tight spaces.  Engineers at the Jet Propulsion Laboratory (JPL) in Pasadena, California will deploy ‘VolcanoBot 2’ into the cracks and crevices surrounding Hawaii’s active Kilauea volcano in March.

The robust, cylindrical-shaped bot is designed to create 3D maps of fissures and crevices that would be too dangerous for humans to explore firsthand.  NASA hopes the bot will help scientists better understand how volcanoes erupt on Earth, and some day, on other planets. 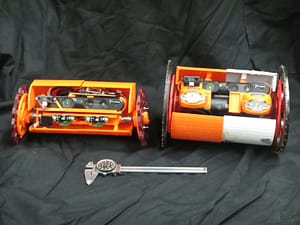 “In order to eventually understand how to predict eruptions and conduct hazard assessments, we need to understand how the magma is coming out of the ground,” said Carolyn Parcheta, a volcanist and NASA postdoctoral fellow at JPL who created the bot. “This is the first time we have been able to measure it directly, from the inside, to centimeter-scale accuracy.”

The Bot’s predecessor, VolcanoBot 1, was tested last year in May at Kilauea volcano.  Parcheta deployed the wheeled robot 82 feet below the surface in two locations of an in-tact volcanic fissure – a rare geological occurrence due to fissures’ tendency to collapse.

Its new-and-improved successor is considerably smaller, lighter, and equipped with stronger motors to traverse the unknown depths of volcanic cracks.